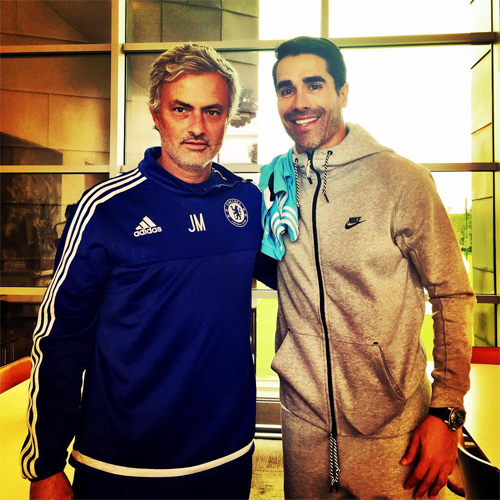 Jose Mourinho clearly has a soft spot for Colombian strikers.

The Blues manager took a punt on Manchester United flop Radamel Falcao earlier this summer after he signed the striker on a season-long loan from Ligue 1 side Monaco.

Falcao has scored an underwhelming four goals in 28 Premier League appearances for Chelsea and United, which is some way short of Juan Pablo Angel’s record in England.

The former Aston Villa striker scored a respectable 44 times in 175 games, which is a pretty challenging benchmark for Colombian strikers in the Premier League.

And Mourinho posed with Angel for a snap on Wednesday afternoon after the retired striker visited Chelsea’s Cobham training ground.

Chelsea have made a disappointing start to the Premier League campaign after a 2-2 draw with Swansea City was followed by a 3-0 defeat by title rivals Manchester City on Sunday.

The Blues make the trip to West Bromwich Albion in their next Premier League fixture on Sunday.