Chelsea signing Pedro Rodriguez poses for a final snap with his Barcelona team-mates after his £21.1m move 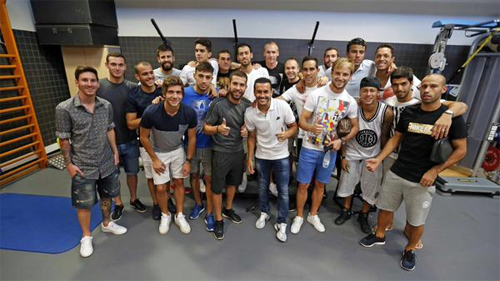 Pedro Rodriguez has bid a final farewell to his Barcelona team-mates with a final photo after he moved to Chelsea in a £21.1m deal on Thursday.

The Spain international called time on a long, successful Barcelona career after he joined the defending Premier League champions in a £21.1m deal.

Pedro made a dream start to his Chelsea career after he broke the deadlock in a 3-2 victory over West Bromwich Albion at The Hawthorns on Sunday afternoon.

And the 27-year-old forward posed for a snap with the Barcelona club for one final time, which the Chelsea forward posted on his Instagram page on Monday.

Thank you for all what I lived and learnt in this club. Good luck and keep on the spell of success. pic.twitter.com/xNi3zxaGbK

The Blues forward should start the west London side’s next Premier League game against Crystal Palace at Stamford Bridge.