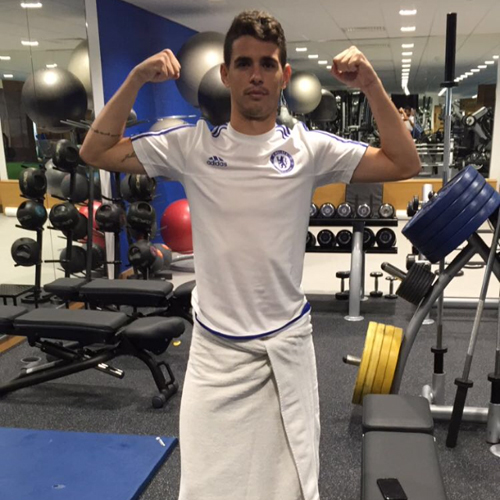 Oscar looked in high spirit as he was snapped in the gym by Chelsea midfielder Cesc Fabregas despite being an injury doubt for their trip to Etihad Stadium.

The Brazil international picked up a knock in training this week which Jose Mourinho confirmed could keep the playmaker out of their clash against Manchester City.

However, Chelsea supporters will be encouraged by Fabregas’s Snapchat on Saturday afternoon after he took a photo of Oscar showing off his biceps in the club’s gym.

The South American scored his first goal of the Premier League season in a stalemate with Swansea last weekend.

Fabregas, who moved to Chelsea from Barcelona in a £27m deal last summer, enjoyed a session on the bike as he gave his legs a light workout ahead of Sunday’s big clash.

Mourinho’s men lost ground on their title rivals last weekend after a surprise 2-2 draw with Swansea City at Stamford Bridge.