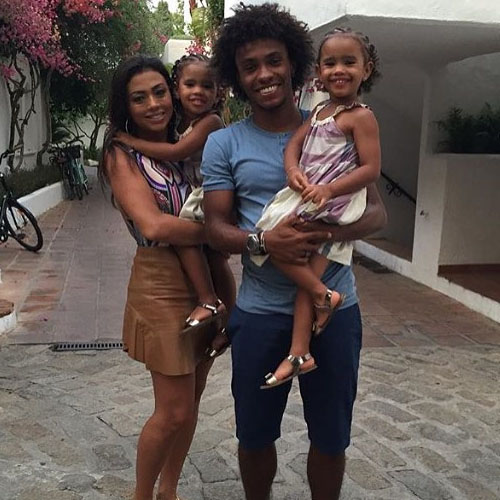 Willian enjoyed a relaxed day with the family ahead of Chelsea’s trip to Manchester City on Sunday afternoon.

The Blues midfielder opened his Premier League account for the 2014/15 season after his cross was deflected past Swansea City goalkeeper Lukasz Fabianski at Stamford Bridge last weekend.

However, Chelsea were unable to protect their 2-1 lead following Thibaut Courtois’s sending off, which resulted in Bafetimbi Gomis converting from the penalty spot.

The defending Premier League champions have endured a week full of controversy off the pitch, but Willian didn’t look to be affected by the drama as he chilled with his wife and kids.

Willian wrote on the photo-sharing: “Family god gave me!”

The 27-year-old South American scored four goals in 49 games in all competitions for the west London side last season.

Chelsea make the trip to Etihad Stadium on Sunday afternoon.

Photo: Alexis Sanchez snuggles up with his best friends ahead of Arsenal clash