Photo: Diego Costa gives thumbs up ahead of Chelsea opener 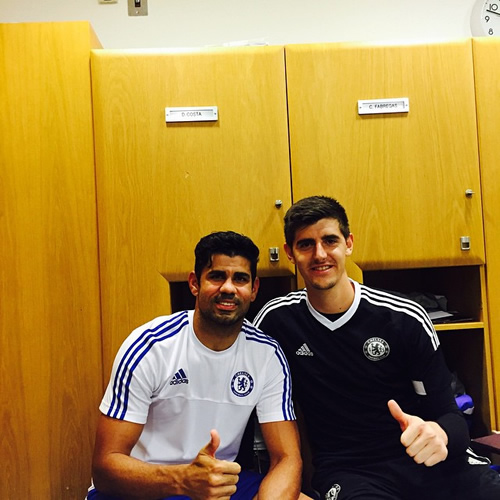 Diego Costa looked to be in good spirits despite his injury struggles as Chelsea prepare for their Premier League opener against Swansea City on Saturday.

The Brazilian-born forward has been hampered by a hamstring injury in recent days as Jose Mourinho’s men gear up for their title defence.

Costa, who struggled with a hamstring problem towards the end of last season, missed Sunday’s Community Shield defeat by Arsenal and Wednesday’s 1-0 pre-season loss to Fiorentina at Stamford Bridge.

Chelsea boss Mourinho conceded this week that Costa was a serious doubt for the Blues’ season opener on Saturday.

However, the Spain international striker looks to be staying in good spirits, as he shared the picture above of himself with Thibaut Courtois on his personal Instagram account and wrote: “With my friend @thibautcourtois after training!”

Costa was Chelsea’s top goal-scorer last season after netting 20 Premier League goals but missed the latter stages of the 2014-15 campaign due to a hamstring injury.

Photo: Liverpool signing counting down days until the season starts