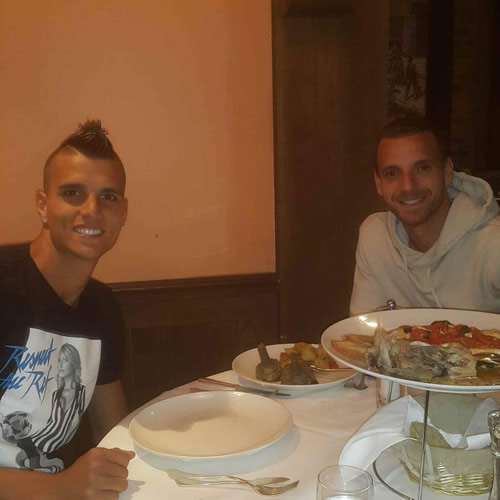 Erik Lamela took to social media on Thursday morning to bid farewell to Roberto Soldado after the Tottenham Hotspur striker closed in on a transfer to Villarreal.

The Spaniard was reportedly pictured at Gatwick Airport on Thursday morning and told fans that he is set to join the La Liga outfit.

Lamela shared the picture of the duo above on his personal Instagram account and wrote: “I enjoyed these two years that we share, I wish you well in your new club !! Good luck my friend !! @r9soldado”

The Argentina international later deleted the post from the photo-sharing app.

Roberto Soldado has been spotted at Gatwick this morning, and has told fans he's joining Villarreal. (Source: ESPN) pic.twitter.com/mffoGxKlEG

Soldado was not included in the matchday squad as Mauricio Pochettino’s Tottenham side slipped to a 1-0 defeat by Manchester United in their Premier League opener on Saturday afternoon.

Spurs are next in action when they take on Stoke City at White Hart Lane on Saturday afternoon.