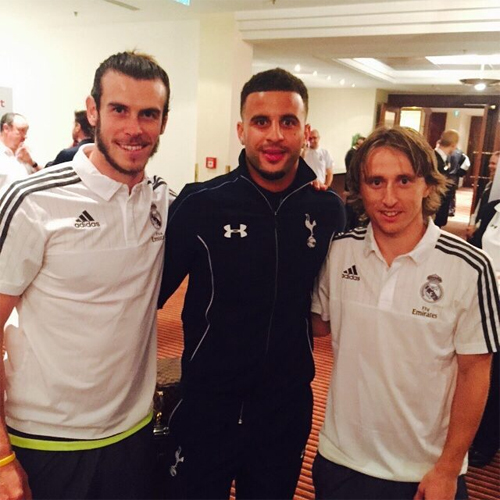 Gareth Bale and Luka Modric caught up with former team-mate Kyle Walker ahead of Real Madrid’s friendly clash against Tottenham Hotspur on Tuesday.

The Madrid pair will face their former employers at Bayern Munich’s Allianz Arena as Spurs look to fine tune their side ahead of their trip to Manchester United in the opening game of the Premier League season at Old Trafford on Saturday.

Wales international Bale has been linked with a sensational return to England after recent reports suggested that the Red Devils have offered a world-record £100m for the 26-year-old forward.

But Bale didn’t appear to be spending any time thinking about the rumours as he focused on the upcoming friendly against the Lilywhites in Germany.

Bale wrote on his Instagram page: “Will be something special for @lukam10 and me with @realmadrid , up against a few old faces @kylewalker2 @SpursOfficial #thfc #halamadrid”

The Welshman scored 42 goals in 164 Premier League appearances for the north London side during a six-year stay at White Hart Lane before he moved to Madrid in a £85.3m deal in 2013.