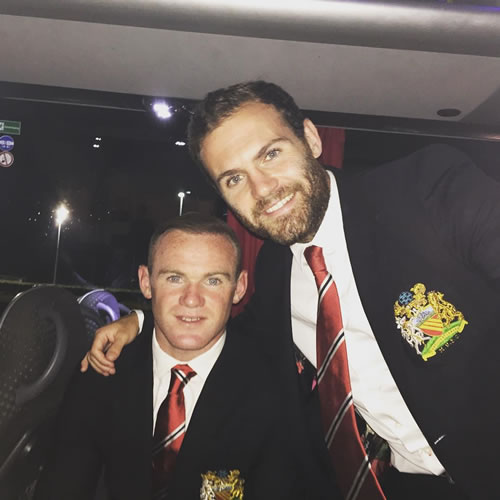 Juan Mata took the time to pose for a picture with Wayne Rooney after the Manchester United striker’s impressive performance in the 4-0 Champions League play-off win at Club Brugge on Wednesday night.

The England captain scored a hat-trick as Louis van Gaal’s men secured their place in the group stage of Europe’s elite club competition thanks to a resounding 7-1 aggregate victory over their opponents.

Much of the build-up to Wednesday’s game had been focused on Rooney’s disappointing goal-return in recent weeks, but the England striker silenced his critics with a superb display against Club Brugge.

Mata snapped a picture with Rooney on United’s team bus as they headed back to the UK on Wednesday night and congratulated the striker and Ander Herrera on their goals.

The Spaniard uploaded the picture above onto his personal Instagram account and wrote: “Back in the #ChampionsLeague! Happy for this guy @waynerooney ⚽️⚽️⚽️ and @anderherrera. @manchesterunited”

Manchester United return to Premier League action when they take on Swansea City this weekend.