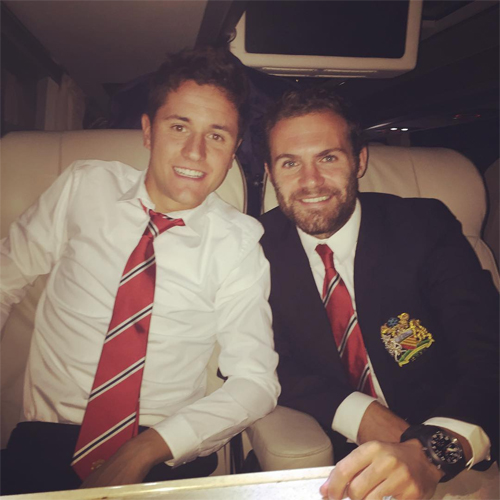 Juan Mata had plenty of reasons to celebrate on Friday night after Manchester United edged to a narrow 1-0 victory over Aston Villa at Villa Park.

The Red Devils were far from their most convincing, but Louis van Gaal’s side proved too strong for Tim Sherwood’s Villa outfit in a rare Friday night fixture.

Mata, who started on the right wing, teed up Adnan Januzaj for what proved to be a 29th-minute winner as the Belgium international managed to beat Villa goalkeeper Brad Guzan.

And Spain international Mata joined his compatriot Herrera, who was a 60th-minute substitute, for a photo to celebrate the win and the midfielder’s 26th birthday.

Mata wrote on Instagram: “Coming back to Manchester with three points! This guy is getting older…! Happy birthday @anderherrera!”

The Red Devils secured back-to-back wins to start the 2015/16 Premier League campaign after United eased to a 1-0 victory over Tottenham Hotspur at Old Trafford on the opening day of the season last weekend.

Van Gaal’s side face Newcastle United at home in their next Premier League outing.