Photo: Liverpool defender gets girlfriend’s name on his boots

Loved up Liverpool defender Jose Enrique shows of his new Adidas boots, including dedication to his girlfriend 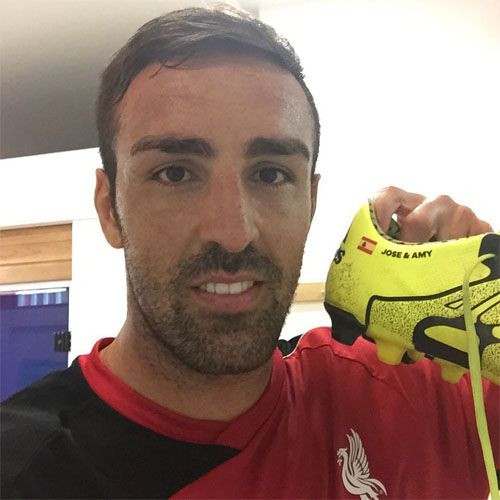 Jose Enrique is arguably the most-loved player in the Premier League after the Liverpool defender took to Instagram to show off his new boots on Thursday.

The uncapped Spanish defender has treated Liverpool supporters to a constant stream of photos from his summer adventures with his long-term partner, Amy Jaine.

The pair are clearly blissfully happy if their public displays of affection are any indication, including a smooch under water on holiday in Spain and a kiss on the roaming hills of the Lake District.

But Enrique has stepped up his romantic behaviour after the 29-year-old posted a snap of his new Adidas boots on photo-sharing app Instagram, which included a special inscription.

Enrique will be hoping to feature more regularly than last season after the 29-year-old made just four Premier League appearances during an injury-hit campaign.

The Liverpool full-back moved to Anfield from Newcastle United under Kenny Dalglish in 2011.