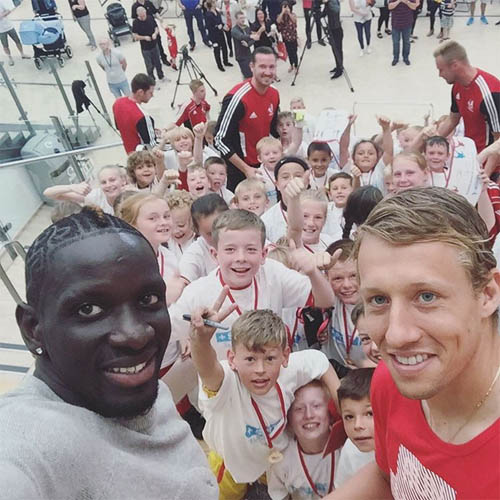 Steven Gerrard may have left Liverpool in the summer, but his former team-mates Mamadou Sakho and Lucas Leiva are keeping his spirit alive on Merseyside.

The Reds duo went along to one of their former captain’s Steven Gerrard Foundation football camps to meet some young supporters on Friday afternoon.

Lucas made his first start of the season in a goalless draw with Arsenal last Monday, whilst Mamadou Sakho has been out of the first-team.

But the France international was all smiles with Fenerbahce target Lucas as the pair took a selfie with some young supporters.

Sakho wrote on his Instagram page: “Glad to be able to support Steven Gerrard’s foundation. @stevengerrard”

Liverpool have made a winless start to the season after two wins and a draw as well as successive clean sheets.

The Reds played out a goalless draw with Arsenal at The Emirates last weekend after back-to-back 1-0 victories over Stoke City and Bournemouth.