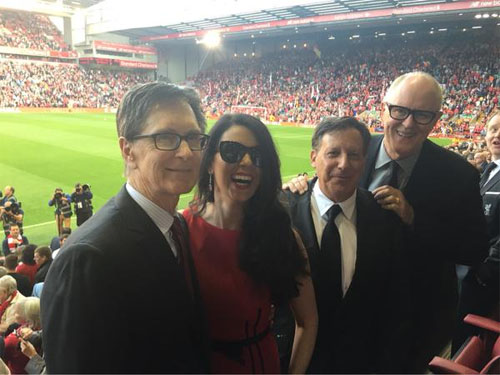 Christian Benteke provided the Liverpool owners with an immediate return on their investment on Monday after the £32.5m signing scored on his Anfield debut in front of John W Henry and co.

The American businessman was joined by his wife Linda Pizzuti, Liverpool chairman Tom Werner and a friend in the stands for the Reds’s close-fought 1-0 victory over the newly-promoted Cherries.

Fenway Sports Group bought Liverpool in 2010, headed by Henry and Werner, and they made Benteke the club’s second-most expensive signing in the Reds’s history after the striker moved from Aston Villa earlier this summer.

And the quartet posed for a snap ahead of Monday night’s clash, which Henry’s partner Pizzuti posted on Twitter.

The Liverpool owners appeared to be content with three points and back-to-back clean sheets after Pizzuti posted another snap following the final whistle.

Another win, another clean sheet for @LFC! Exciting match, credit to supporters of both teams for great atmosphere pic.twitter.com/0tnBrqflJv

Liverpool make the trip to Arsenal at The Emirates next Monday.

Three reasons why Christian Eriksen should stay at Tottenham