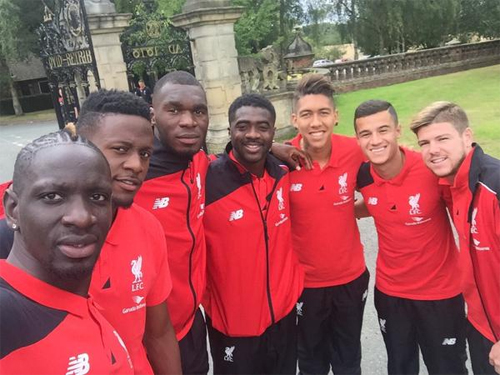 Mamadou Sakho and his Liverpool team-mate look relaxed about the prospect of facing Stoke City as the Reds defender snapped a selfie with some of his fellow squad members on Sunday afternoon.

The Reds return to the ground where they suffered a 6-1 rout at the hands of the Potters in their most recent Premier League outing, which condemned the Merseyside outfit to a lowly sixth-place finish.

And Sakho, who was part of the Liverpool side that lost 6-1 to Stoke in May, joined the new signings as well as Divock Origi, Kolo Toure and Alberto Moreno for a cheeky pre-match selfie.

More: Carragher: Why Liverpool have bought well this summer

Brendan Rodgers’s Liverpool side have won just one of their last three tips to Britannia Stadium over the past four seasons.

Jamie Carragher: Why Liverpool have bought well this summer