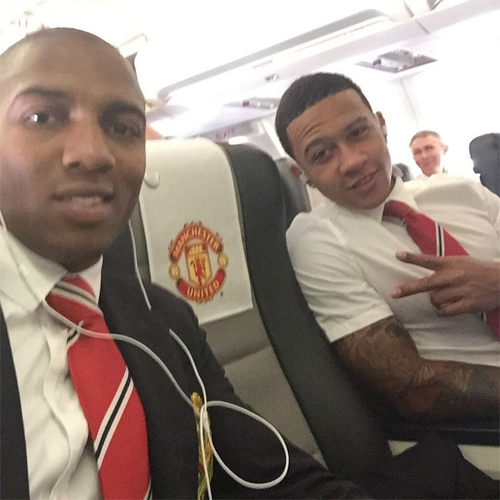 Memphis Depay and Ashley Young were all smiles as the Manchester United squad head to Belgium for their Champions League clash on Wednesday night.

The Netherlands international scored his first goals for the Red Devils last week after Depay helped United to come from behind to win 3-1 against Club Brugge.

However, Depay was unable to score in a goalless draw with Newcastle United at Old Trafford on Saturday afternoon, extending his goalless run in English top flight.

And United winger Young posed for a snap with Depay ahead of the flight to Belgium on Tuesday afternoon.

Young wrote on Instagram: “On the way to Belgium with @memphisdepay. See you there! #RedArmy”

United have collected seven point from a possible nine in the Premier League this season after wins against Spurs and Villa.