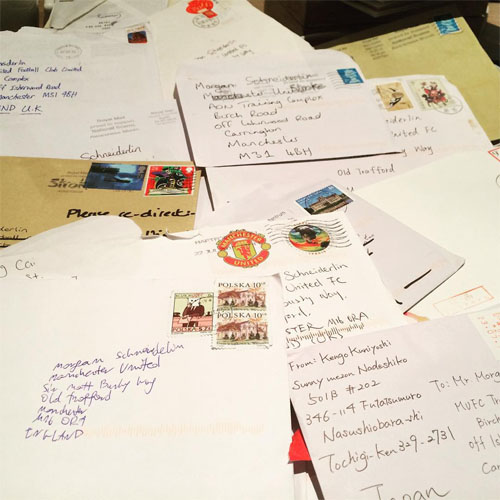 Morgan Schneiderlin has only been at Manchester United for the best part of a month but it appears the midfielder has already won over Red Devils fans.

The France international made his Premier League debut for the Red Devils in a 1-0 victory over Tottenham Hotspur at Old Trafford on Saturday afternoon.

Schneiderlin moved to United in a £25m switch from Southampton last month as he opted to link up with Louis van Gaal’s squad despite interest from Arsenal and Tottenham Hotspur.

And the United signing took to Instagram to thanks his new supporters for all their fan mail – and their appears to be a lot of it – as he responded to his many admirers.

Schneiderlin wrote on the photo-sharing app: “From Australia, from China, from Germany, from France, from Japan, from Italy, from South Korea from USA and from many other places all over the🌍 … 📬 Thank you for your mails ! You guys are awesome , i feel 🍀 …[email protected]
#BeTheDifference”

United, who finished fourth in Van Gaal’s first season in charge at Old Trafford, face Aston Villa in their next Premier League game on Friday afternoon.

Schneiderlin is one of five new arrivals at Manchester United this summer, with the Red Devils having also signed Sergio Romero, Matteo Darmian, Bastian Schweinsteiger and Memphis Depay.