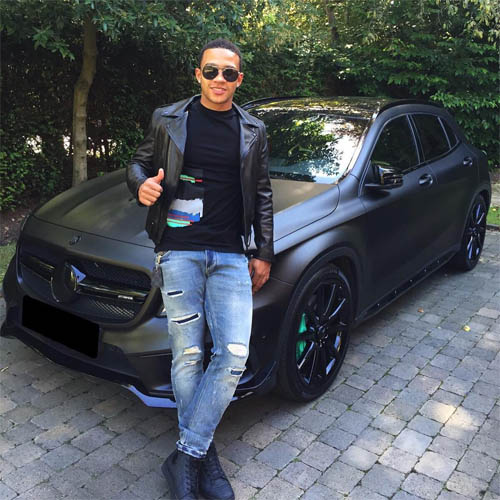 Memphis Depay has been exploring Manchester in his new pimped out ride.

The Netherlands international helped Manchester United book their place in the Champions League group-stage draw after a 4-0 victory over Club Brugge on Wednesday night.

Depay has a relatively quiet evening after the £25m summer signing scored a brace in a 3-1 first-leg win at Old Trafford last week to put United in pole position to reach the next round.

And the 21-year-old treated himself to some work on his Mercedes supercar before he took it for a spin around his new surroundings.

Depay wrote on Instagram: “Lovely day in Manchester 🌞 and thnx to @optimacars they did a great job on my car !”

Depay has scored two goals in five games for the Red Devils in all competitions since his big-money move to Old Trafford.

United make the trip to Swansea City at Liberty Stadium in their next Premier League game on Sunday afternoon.

Photo: Chelsea’s Cesar Azpilicueta all smiles on his way to France