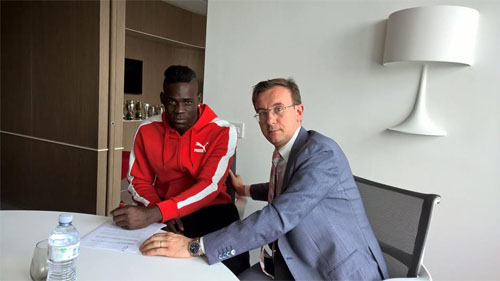 Mario Balotelli has sent a heartfelt message to Liverpool supporters after the striker sealed a return to AC Milan.

The Italy international has re-joined the Serie A side on a season-long loan from the Merseyside outfit after struggling to make an impression during his 12 months at Anfield.

Balotelli scored just one Premier League in a 2-1 draw with Tottenham Hotspur last March despite making 24 appearances in the English top-flight under Brendan Rodgers.

And the 25-year-old striker, who celebrated his birthday earlier this month, posted a snap on his Facebook page accompanied by a statement aimed at Liverpool fans.

Balotelli wrote: “I’m grateful to Liverpool FC and Liverpool fans for the time and opportunities you gave me. It’s not a goodbye but rather a farewell. I’ll be supporting you guys all the way in every competition… unless you face AC Milan. 🙌🏿🔴👉🏿✊🏿 #YNWA #SUPERMARIOISBACK #IAMTHE45”

Balotelli, who moved to Liverpool from Milan in a £16m deal last summer, managed to score just once in 24 top-flight appearances.

The Italian striker, who moved to Anfield from Milan in a £16m deal last summer, was part of City’s Premier League-winning title side in 2013.