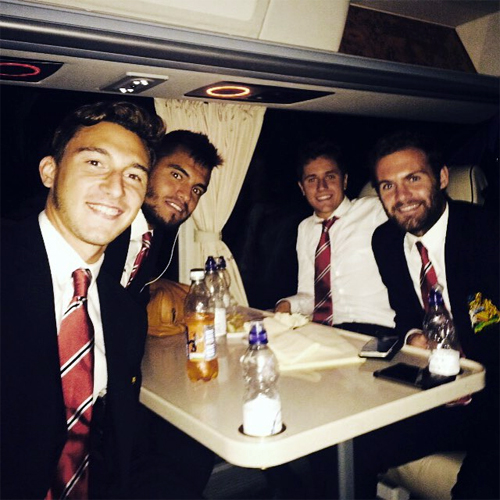 Matteo Darmian and his Manchester United team-mates were all smiles as they posed for a celebratory selfie on the team bus after their 1-0 win at Aston Villa.

The Italy international helped the Red Devils secure back-to-back clean sheets on Friday night after a narrow win against Tim Sherwood’s side at Villa Park.

Darmian has been Louis van Gaal’s standout performer amongst the United manager’s summer signings so far after he moved to Old Trafford in a £12.5m deal from Torino last month.

And the 25-year-old joined United goalkeeper Sergio Romero and Spanish duo Ander Hererra and Juan Mata for a snap on the Red Devils coach after their victory.

Darmian wrote in just his third post on the photo-sharing app: “Going back to Manchester with another victory! Really appreciate a huge support of #mufc fans!! And last but not list thing Happy Birthday to my friend @anderherrera”

The Red Devils manager opted to start Adnan Januzaj ahead of former Villa winger Ashley Young and the move paid dividends after the Belgium international scored a first-half winner.

The 20-year-old picked up Juan Mata’s threaded pass before he placed a finish past Villa goalkeeper Brad Guzan in the 29th minute at Villa Park.