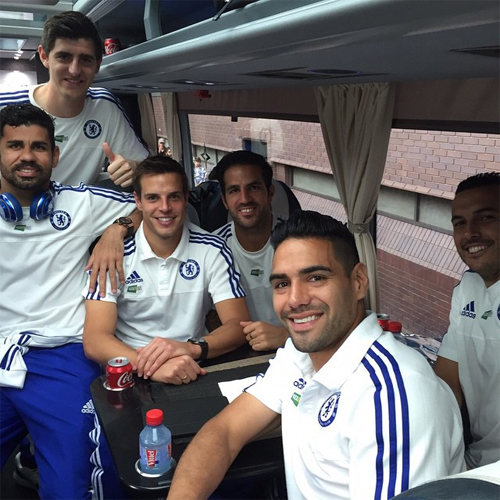 Pedro Rodriguez joined his Chelsea team-mates for a snap on the team bus after he scored his first Blues goal in 3-2 victory over West Bromwich Albion at The Hawthorns.

The Spain international scored inside 20 minutes of his Chelsea debut after he combined with former Barcelona team-mate Cesc Fabregas before his strike was deflected past Boaz Myhill.

His fellow Spaniards Diego Costa and Cesar Azpilicueta also found the back of the net at West Brom, and Chelsea held out for three points despite James Morrison’s brace and John Terry’s red card.

And Chelsea goalkeeper Courtouis, who made his return to the starting line-up after serving his ban, took a photo with Azpilicueta, Pedro, Costa and Radamel Falcao following the win.

Pedro moved to Chelsea in a £21.1m deal from Barcelona on Thursday after he opted to join the Blues despite prior interest from Manchester United.

Chelsea face Crystal Palace in their next Premier League game at Stamford Bridge on Saturday.