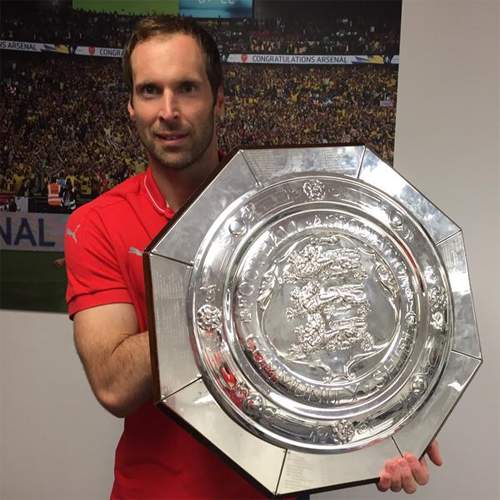 Petr Cech thanked Arsenal and Chelsea supporters after the Gunners goalkeeper got his hands on the Community Shield for a third time on Sunday.

The Czech Republic international made his competitive debut for the north London side following his £11m move to Arsenal from Chelsea last month.

The 33-year-old was called upon to make two saves during the clash between the London rivals as Alex Oxlade-Chamberlain scored a first-half winner.

And the Gunners goalkeeper dedicated a Twitter message to Arsenal and Chelsea fans as Cech posed with the trophy following another win at Wembley.

What a day @Wembley ! Thank you @arsenal fans and @ChelseaFC fans for your support ! pic.twitter.com/8fNKgSPNNY

Cech traded Chelsea for Arsenal in July after a decorated 13-year career at Stamford Bridge.

The Arsenal goalkeeper could make his Premier League debut for Arsene Wenger’s side against West Ham United at The Emirates next weekend.

Photo: Alexis Sanchez enjoys dinner with his brother ahead of Arsenal return