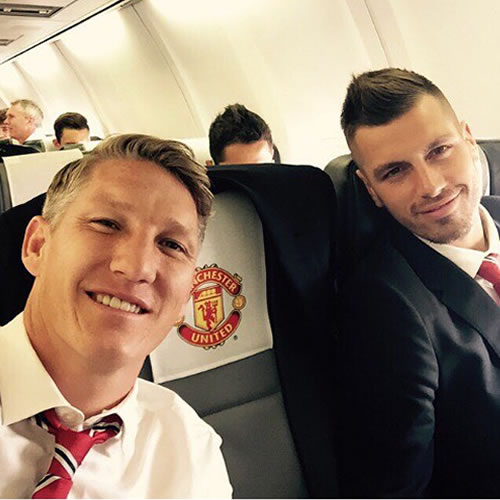 Bastian Schweinsteiger and Morgan Schneiderlin appear to be working on their midfield partnership both on and off the pitch ahead of Manchester United’s clash against Club Brugge on Wednesday night.

Schweinsteiger came off after 60 minutes to be replaced by England international Michael Carrick as United played out a goalless draw with Newcastle United in the Premier League at Old Trafford.

And the World Cup winner posed for a snap alongside Schneiderlin ahead of their flight to Belgium.

Schweinsteiger wrote: “On our way to Bruges. @schneiderlinmo4 #mufc”

The 31-year-old midfielder made successive substitute appearances in a 1-0 victories over Tottenham Hotspur and Aston Villa in the opening two games of the Premier League season.

Schweinsteiger is bidding to win the Champions League for a second time after Bayern won the competition at Wembley in 2013.