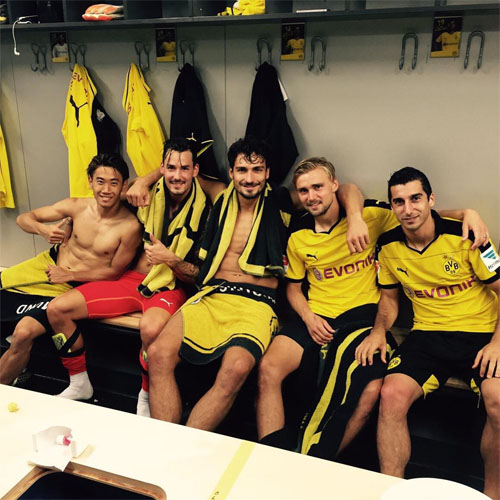 Shinji Kagawa posted for a snap alongside Manchester United target Mats Hummels after Borussia Dortmund started their Bundesliga campaign with a win.

BVB were emphatic 4-0 winners against Borussia Mochengladbach on Saturday after goals from Marco Reus, Pierre-Emerick Aubameyang and Henrikh Mkhitaryan.

United manager Louis van Gaal is still on the lookout for a world-class after having played Daley Blind out-of-position in a centre-half role in their opening two games.

And Japan international Kagawa has presumably discussed his experience at United with the World Cup-winning Dortmund defender.

Kagawa wrote on the photo-sharing app: “It was great game👍🏻thanks for your support👏🏻👏🏻
#BVB#Bundesliga#sk23”

Hummels has scored two goals in 24 Bundesliga appearance for Dortmund this season in an injury-hit campaign for the towering centre-half.

The BVB captain was part of Joachim Low’s triumphant Germany squad that lifted the World Cup in Brazil last summer thanks to an extra-time victory over Argentina in the final.

The Red Devils have also been linked with a move to sign Everton defender John Stones.