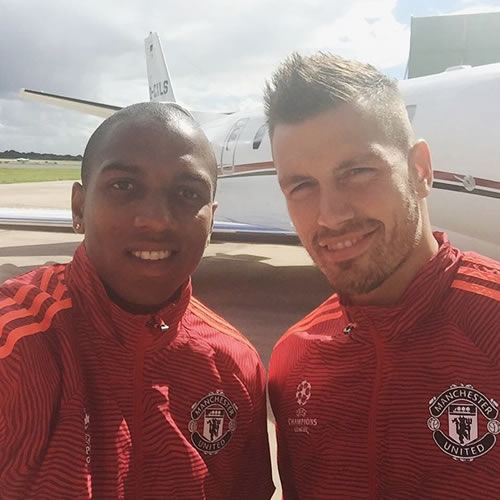 Ashley Young was all smiles as he posed for a selfie with Morgan Schneiderlin as the Manchester United duo headed to France for a promotional event with Adidas.

The pair were heading to Marseille to promote the launch of United’s new black third kit which was unveiled on Thursday after the Red Devils’ Champions League win over Club Brugge on Wednesday night.

Young posted the picture above with the France international on his personal Instagram account and wrote: “Heading to the #BeTheDifference World Final in Marseille with @adidasuk and @schneiderlinmo4. Will be wearing the new @manchesterunited kit too 👌🏾”

The predominantly black third kit, which will be used for United’s away Champions League fixtures, features an orange pop on the three stripes and the same graphic design that has featured on both the home and away kit hem, but this time across the front of the shirt.

Quick trip home to France with @youngy_18 for the @adidasUK #BeTheDifference World Finals.

Adidas were keen to mark the return to Europe’s premier competition by reintroducing the predominantly black colour scheme, which was first seen in 1993 and has become a staple look for Manchester United ever since.

Manchester United return to Premier League action against Swansea at the weekend.