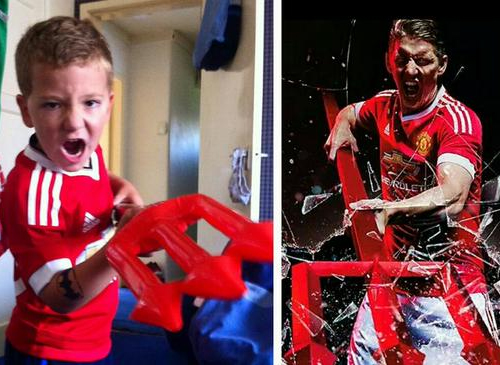 One Manchester United supporter has earned the respect of Bastian Schweinsteiger after mimicking the German legend’s Red Devil pose.

The World Cup winner has taken long to win over the hearts of Untied fans following his summer move to Old Trafford from Bayern Munich.

Schweinsteiger was looking his most-fearsome in the club’s Adidas promo campaign for their new home kits, unleashing his inner Red Devil.

And it provided inspiration for one young United fan, who did a pretty good job of imitating Schweinsteiger – and the Germany legend approved.

Fantastic picture. Thank you so much for the support! #mufc https://t.co/wFeKZBNwBe

Schweinsteiger has been showing his brother Tobi around Manchester this week after he helped United earn a 3-1 win against Club Brugge in the first leg of their Champions League play-off on Tuesday.

The 31-year-old also made substitute appearances in a 1-0 victories over Tottenham Hotspur and Aston Villa.

Schweinsteiger could make his first United appearance in their home game against Newcastle United at Old Trafford on Saturday afternoon.