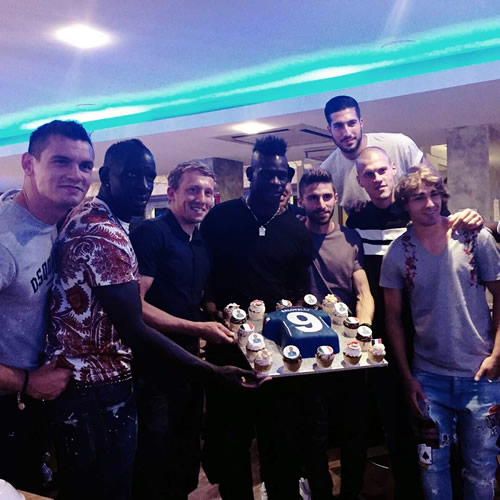 Mario Balotelli was joined by the likes of summer signing Roberto Firmino and Lucas Leiva as the Liverpool striker celebrated his 25th birthday on Wednesday night.

The Italy international turned 25 on Wednesday and was joined by a host of his club team-mates to celebrate.

Balotelli’s future at the Merseyside outfit continues to be a source of speculation, but that did not stop the forward from enjoying his night with his team-mates.

Leiva, Mamadou Sakho, Lazar Markovic, summer signing Firmino, Divock Origi, Emre Can, Dejan Lovren and Martin Skrtel were among the Reds stars to turn out at the Sorrento Restaurant in Formby.

The forward’s birthday cake was the Blue of Italy rather than the Red of Liverpool as he continues to be linked with a transfer away from Anfield.

Balotelli managed to score just four goals in his first season at Anfield following his transfer to the club from AC Milan last summer.