As Rafael Nadal gears up for the US Open, it is clear he loves this city, this vibe and these courts 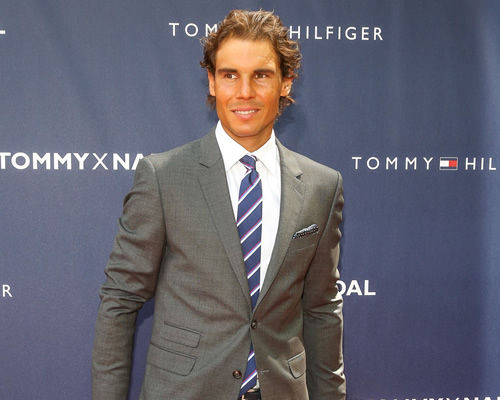 The last time Rafael Nadal appeared at the US Open, which begins in five days’ time, he left New York with the title.

It would be the highlight of an outstanding return to the tour for the Spaniard after an absence that began with Wimbledon in 2012 and did not end until February 2013, in Chile.

Vina del Mar would mark the first final of an eye-watering 14 finals for Nadal that year, and the US Open title would be one of 10 titles—the culmination of an unbroken US Open Series run through the Montreal and Cincinnati Masters as well: A remarkable 75-7 season of only nine months.

My confidence is fine. I think I’ve been playing better than what the results say

It was taken as read that he would be back to defend his title in 2014, but once again, Wimbledon marked a virtual end to his year: He would manage only three autumn tournaments before injury and appendicitis did their worst.

So this year finds him in The Big Apple for, in effect, his first chance to defend that 2013 title—except that this time around, his return from injury and illness has proved rather tougher and longer. He has captured just three tour titles and reached the final of only one Masters. Even his beloved Roland Garros let him down, and he has yet to beat anyone ranked higher than seven.

It has never been the way of the modest Spaniard to talk up his hopes and expectations, even while he has dominating the Majors, Masters and rankings, so it is perhaps no surprise that he has played down his chances over the next fortnight after his uncharacteristic slide from the top four last spring and on towards No10 after the French Open and Wimbledon.

Instead, he has insisted that his priority is to qualify for the ATP World Tour Finals, which he also missed last year—and with great timing, he has indeed edged back to No8 in time for New York.

He told ATPWorldTour.com: “It’s obvious that I will be arrogant saying I will win the US Open after the year I have had, but I will say I feel better than most of the season. We’ll see if it’s enough. I enjoy the fact that I am here.” 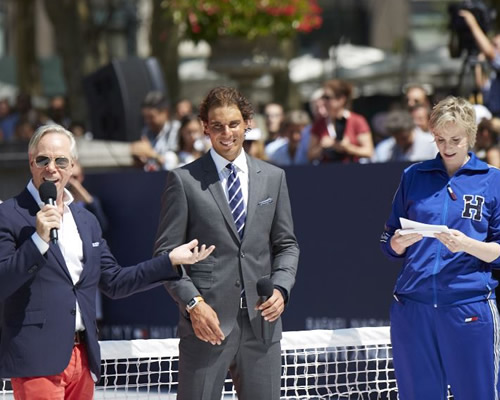 Rafael Nadal is gearing up for the US Open Photo: Tommy Hilfiger

He went on to talk of confidence—a commodity that was in short supply earlier this year after some unexpected losses.

“My confidence is fine. I think I’ve been playing better than what the results say the past couple of tournaments. I’m doing things well. It’s always the same after losing some matches during the year to find the momentum again. I’m in this process and I know I am better than months ago.

But it was his confidence in an altogether different arena that hit New York between the eyes long before he embarked on the serious work of winning matches at Flushing Meadows.

It began on Monday night alongside some of the biggest stars in tennis as his kit sponsor, Nike, converted part of down-town Manhattan into a street-tennis event. Glitz barely did justice to the array of stars who posed with Nadal on a classic yellow taxi: Roger Federer, Maria Sharapova, Serena Williams, Pete Sampras, Andre Agassi… the list went on.

But it was with another fashion icon, Jimmy Hilfiger, that Nadal really let his hair down. The clothing company has recruited Nadal as its global brand ambassador in a two-year deal launched yesterday in the heart of New York.

With the release of the first video early Tuesday morning, it soon became clear that Nadal had entered fully into the spirit of a campaign that includes underwear, tailored suits and a new fragrance, TH Bold. ‘Bold’ was the right word.

Filmed close to Nadal’s home in Mallorca, it showed off both underwear and Nadal’s famed physique—and not a little Spanish confidence.

Later came the transformation of Bryant Park into a tennis court for a celebrity tournament with a difference: Each lost point was penalised by removing an item of clothing. By the time Nadal posed for photos with fellow celebs and enthusiastic onlookers, he was again stripped to the waist.

As the Hilfiger campaign, dubbed ‘The Fall 2015’, is rolled out, it will brandish more images of Nadal on billboards across the world, as well photos and films via print, TV and social media. They will be hard to miss.

The two-time US Open champion has not fallen short of the semi-finals at Flushing since 2008, and has lost only one match there in his last three appearances. He clearly loves this city, this vibe and these courts.

And after his off-court appetisers this week, you can be sure New York will love him more than ever too.