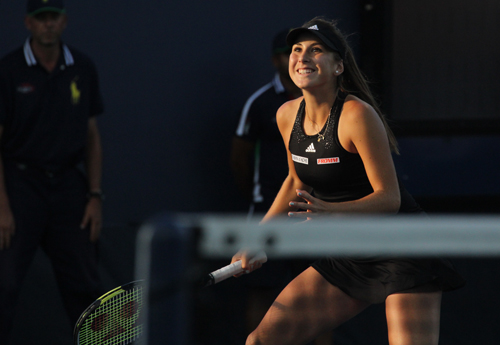 It is only two years since a new Swiss name was carved on a Wimbledon Junior trophy—15 years after her illustrious compatriot Roger Federer had done the same—but already the 18-year-old Belinda Bencic has claimed one of the most prestigious WTA titles on the tour, the Premier Rogers Cup in Toronto.

Less than 24 hours after she scored the biggest win of her young career and the biggest shock of the tournament, beating world No1 Serena Williams for only the second time in 45 matches this year, she took on and beat world No3 Simona Halep in a rollercoaster of a final, 7-6, 6-7, 3-0.

Bencic began aggressively, though there were multiple breaks on both sides, but Halep soon began to show signs of the stresses of playing in extreme heat and humidity in the early afternoon, first taking a medical time out for a leg problem and then another for the heat.

But Bencic, mature beyond her years, took an early break in the second set and served for the match at 5-3, only to tighten up. She was broken back by the free-swinging Halep, and the Romanian took the subsequent tie-break.

But after another absence from court, Halep was clearly still suffering physically, while Bencic looked remarkably fresh, given her late and long three-setter against Williams the day before. And rather than fall into the trap of waiting for her opponent to make mistakes, as she seemed to do in the second set, Bencic reverted to her aggressive game, stepped into court, and broke straight away.

The writing was on the wall for Halep, and with two and a half hours on the clock, she retired at 0-3: an unfortunate way to conclude a big final but Bencic should be no less delighted at her achievement.

After a slow start to the season, Bencic has continued to take great strides during 2014. At the end of last year, she surged to a ranking-high of 32 having won only her first Grand Slam match at the start of the year in Australia. She went on to reach the semis in Charleston and the third round at Wimbledon before making a breakthrough run at the US Open, where she made the quarter-finals via wins over two top-10 players: Jelena Jankovic and Angelique Kerber.

She ended the year in the Tianjin final, and although she started 2015 slowly, she beat Caroline Wozniacki in a third-round run at Indian Wells and reached the fourth round in Miami.

Now with comparisons with former Grand Slam champion Martina Hingis, the original ‘Swiss Miss,’ ringing in her ears—and Bencic’s nimble style of tennis does have echoes of Hingis—Bencic began a surge of 20 wins in 24 matches, first reaching the final in ‘s-Hertogenbosch, then winning her first title on Eastbourne’s grass with victories over Agnieszka Radwanska, Eugenie Bouchard and again Wozniacki, and made a strong fourth-round showing at Wimbledon.

But though she was now ranked 20, she came into Toronto unseeded and faced as daunting a draw as it is possible to produce: six straight Grand Slam finalists and, with Halep’s scalp, four top-10 players.

Her win over Williams made Bencic the youngest ever to beat the American in a completed match since Maria Sharapova in 2004, and the first teenager to win Premier 5 tournament or higher since Victoria Azarenka won Miami in 2009. She is also the first unseeded player to beat the top two seeds at a Premier since Justine Henin at Charleston in 2005.

Bencic will also rise to a new high of No12 on her way to Cincinnati tomorrow, though sadly her ranking rise does not come into effect for that tough 56-woman tournament: She is unseeded and so faces another imposing draw, beginning with No11 seed Kerber, taking in French Open finalist Lucie Safarova in the third round, and then if the seeds pan out, Petra Kvitova and another Williams semi-final.

Bencic will not lack confidence after her Toronto antics, though whether she has the stamina for a repeat—well that is another question.

But this charming young Swiss is here to stay. As she said after beating Williams: “I wouldn’t believe it. I mean I’m trying to believe that I can really beat the top players now, but it’s crazy that I’ve beaten all of them now in this week.”

But she has. Watch out New York.