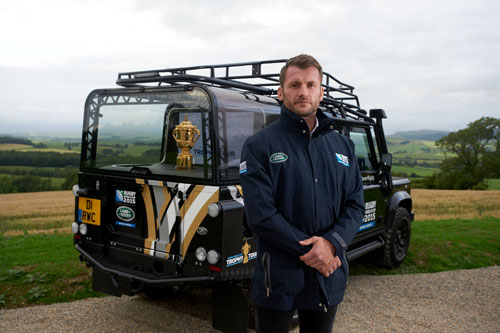 He may not be first or even second choice for England’s coveted No10 shirt at this year’s Rugby World Cup, but Danny Cipriani can be the game-breaker at fly-half for the Red Rose, according to former Sale Sharks team-mate Mark Cueto.

Often more widely known for his antics off the field, the 27-year-old impressed in the Premiership last term, as well as in an England shirt – making an impact in three appearances off the bench during the Six Nations as well as delivering a 33-point return against the Barbarians in May.

Cueto, who himself came within inches of scoring a vital try for England in the Rugby World Cup 2007 final defeat by South Africa, retired from professional rugby in May after 15 years at Sale.

During the limited time he got in the Six Nations he did well, and played brilliantly in the Barbarians game, so he has shown why he warrants being included in that squad

But having played alongside Cipriani for his final three seasons, no-one has been better placed to see the maverick former golden-boy of English rugby work his magic and turn himself into the complete package at No10.

“Unfortunately for him I think if he’s going to have a part to play in Rugby World Cup 2015, it’s going to be in a role coming off the bench,” said 35-year-old Cueto.

“They will probably pick two out-and-out No.10’s in George [Ford] and Owen [Farrell], but then there is room for him as a utility back, and Henry Slade is probably his biggest rival there.

“With my Sale hat on I’d love to see him play, and 100 per cent he can change a game if you were to throw him on, more so than any other fly-half in the country.

“There’s things that I’ve seen him do with a rugby ball that I haven’t seen anyone else do in 15 years of professional rugby, so from that point of view if you are in a game – even during a Rugby World Cup – with ten minutes to go and you need five points, there is no-one better to have than Danny Cipriani.

“The way he has developed his game is exceptional. We all know he is capable as a creative, Carlos Spencer type of No.10, but that sort of stuff is not what’s most important at international level. Your basics are vital; your game-management, your defence, your goal-kicking.

“And that side of the game is what Danny has improved, probably by ten times in the last two years.

“During the limited time he got in the Six Nations he did well, and played brilliantly in the Barbarians game, so he has shown why he warrants being included in that squad, and fingers crossed he gets in the final 31.”

Cueto was speaking on behalf of Land Rover in Skipton, as the Rugby World Cup 2015 Trophy Tour reached the North Yorkshire Dales as part of a 100 day tour of the UK and Ireland.

Having played in two Rugby World Cups himself during his 55 appearances in an England shirt, Cueto understands the hype around the Tournament and the iconic Webb Ellis Cup.

And after taking on the rough Yorkshire terrain in the spectacular custom-built Rugby World Cup 2015 Trophy Tour Defender, specially commissioned for the Trophy Tour by Land Rover’s Special Vehicle Operations department, Cueto believes the chance for thousands of fans to see the Trophy in the flesh will have a huge effect on grassroots rugby.

He added: “It was a great drive and the Defender looks absolutely fantastic. The way it displays the Webb Ellis Cup too is brilliant – it’s such a special Trophy and when it’s in town it just attracts everybody.

“The Rugby World Cup 2015 Trophy Tour has been massive. The Webb Ellis Cup has been everywhere, and it’s so important for the grassroots side of the sport.

“To see it at local rugby clubs is fantastic for everybody, especially young players, and I’ve really enjoyed being the one to bring it here to Yorkshire. A whole range of people turned out to see it, and that just shows the excitement is already building for Rugby World Cup 2015.”

Mark Cueto was speaking on behalf of Land Rover, a Worldwide Partner of Rugby World Cup 2015. Land Rover is recruiting all 96 official mascots for the Tournament as part of its ‘We Deal In Real’ campaign. Follow @LandRoverRugby #WeDealInReal