Former England captain Martin Johnson discusses Sam Burgess, his likely World Cup inclusion and where his best position in the team is 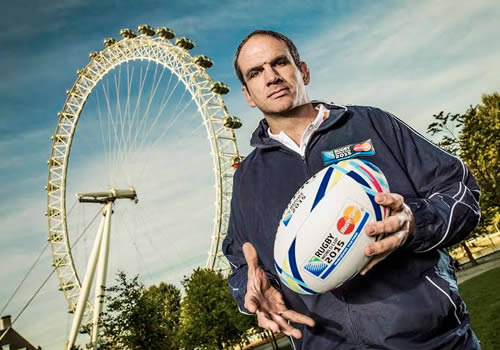 The debate rages on as to whether Sam Burgess can play international rugby union at centre, but whatever happens in this weekend’s acid test against France at Twickenham; former England captain Martin Johnson insists the experiment will be well worth it.

Burgess is set to make his England debut at centre on Saturday when France come to Twickenham, less than a year since he made the switch over from rugby league.

His start to life in union hasn’t exactly been plain sailing with his club side Bath initially starting him out in the midfield before moving him to the back row, where he begun to turn heads at the end of the season.

England head coach Stuart Lancaster feels the opposite is true for the 26-year-old with his ball carrying and threat to the gain-line a real asset in the centres, while World Cup winner Matt Dawson questions Burgess’ ‘game management’ to play that position.

But Johnson – who won the World Cup alongside Dawson in 2003 – is adamant Lancaster’s test will pay off sooner rather than later for England as a whole.

“Sam came in with huge expectations that he can do this and do that, but it was never going to be easy – you’re changing sports at the highest level and it’s difficult,” said Johnson, speaking as a MasterCard Rugby World Cup 2015 brand ambassador. MasterCard will be delivering Priceless Surprises to MasterCard card holders and rugby fans around the world.

“He has the skills but transferring them to play centre in rugby union, it’s a different game and nuances that there are there which aren’t in rugby league and vice-versa. He’s admitted that himself and it’s a difficult position playing in the centres.

“There’s difficulty playing in the back-row and Stuart says his line-out work is not where it needs to be yet, so he’s not going to consider him there.

“But he’s got a chance in the centres and if he doesn’t make it right now then fine, there’s next year and there’s another World Cup in four years time that he’ll be young enough to play in.

“I think it’s experimental at this time but that’s fine, let’s hope he plays and you make your call from there.

Burgess’ raw talent runs through Lancaster’s potential World Cup squad with a number of young and exciting talents looking to star on the biggest stage of all.

When Johnson helped lift the Webb Ellis Cup 12 years ago he had fellow experienced heads all around him – the likes of Jason Robinson, Mike Tindall, Phil Vickery, Lawrence Dallaglio, Will Greenwood, Dawson and Jonny Wilkinson helping to form a tight-knit group.

Ahead of this World Cup things couldn’t be much different with George Ford, Jonathan Joseph, Anthony Watson and Billy Vunipola all undoubtedly talented but still relatively fresh when it comes to Test rugby.

But Johnson believes this is no reason for fans to start pushing the panic buttons just yet.

“Inexperience can be a hindrance but you’ve got to rely on those guys who have been to the World Cup before and there have been a few, Courtney Lawes, Tom Wood, so those guys will need to help out with the group,” added Johnson, who is a MasterCard Rugby World Cup 2015 brand ambassador.

“But sometimes it can help if you’re young and just go in there without as much of a burden.

“We’ve seen in the last two tournaments that teams have got to a final who no one really thought would, and both had a chance to win it – England in 2007 and France in 2011.

“There’s no set way of doing it, Stuart (Lancaster) will pick the best squad for what he thinks will win it at the present moment. You pick your best group and go with it.”

Martin Johnson is a MasterCard Rugby World Cup 2015 brand ambassador. MasterCard will be delivering Priceless Surprises to MasterCard card holders and rugby fans around the world.