Why Tottenham striker Harry Kane could be a one-season wonder 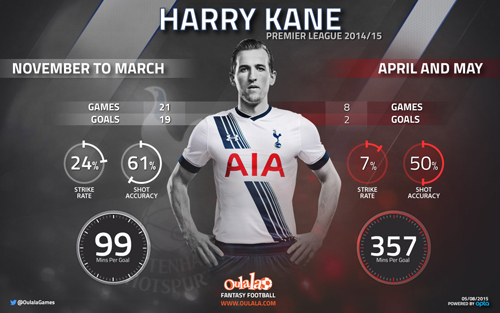 Can Harry Kane follow up his impressive goal scoring feats of last season? A question that has divided opinion.

Tottenham manager Mauricio Pochettino believes Kane can go on to become one of the world’s greatest strikers, while former England forward, Stan Collymore, sees a season of disappointment for the 22-year-old, with Kane suffering from ‘second season syndrome’.

The Spurs boss has spoken in response to Manchester United’s rumoured interest in Kane.

“He’s excited to start the season with us. Any doubts about his commitment are gone,” Pochettino said.

Speaking of Kane’s potential, the Tottenham manager added: “He can manage this pressure. He is young but he is very mature. He is in a very good way to become one of the best strikers in the world.”

However, Collymore has a different view about Kane.

The former Liverpool and Aston Villa forward said: “Harry Kane will have question marks against him. Second season syndrome strikes often in young players and I see a season of disappointment.”

As Spurs travel to Old Trafford to play Manchester United in the Premier League’s opening game on Saturday, Opta-powered fantasy football game www.oulala.com have taken to the task of dissecting Kane’s debut season.

Kane began with a late winner at the beginning of November in a 2-1 away win at Villa Park. It was to become the first of 19 goals in 21 games up until March.

The 22-year-old took the Premier League by storm in his first five months. He was scoring a goal, on average, every 99 minutes, a rate of almost a goal-a-game. His strike-rate was at an impressive 24%, hitting the back of the net for every four shots attempted and his accuracy, a respectable 61%.

However, as soon as April struck the striker’s form dipped. In his final eight league games, Kane managed to find the net just twice, a drastic drop to a goal every 357 minutes. In the process, his strike-rate fell to just 7% with his accuracy also suffering, hitting the target only half of the time.

The dip in form that Kane suffered at the tail end of last season points heavily in Collymore’s favour. Many would point to tiredness. However, would Spurs have allowed Kane to join up with the Under-21s in the summer had he not been in the right physical condition?

Did ‘second season syndrome’ hit Kane before his first season was even over? Have Premier League defenders finally worked him out?

Premier League preview: Why Arsenal will win the title