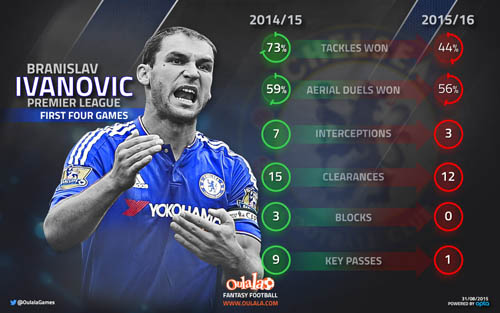 On Saturday, 49.6% of Crystal Palace’s attacks came down Chelsea’s right-hand side. With Branislav Ivanovic identified by Eagles manager Alan Pardew as the Blues’s weak-link defensively.

Of the nine goals that Chelsea have conceded this season, seven have come down their right. Ivanovic has been involved in, and arguably responsible for six of them.

The Serb was the Premier League’s best right-back last season as he was named in the PFA team of the year.

However, stats released by Opta-powered fantasy football game www.oulala.com highlight Ivanovic has suffered a big drop in form this season.

Crystal Palace’s first goal at the weekend started on Chelsea’s right. The Serb was beaten by a pass, resulting in a cross to Backary Sako who finished. Ivanovic is winning far fewer tackles this season, a disappointing 44% has seen a dramatic drop from last season’s impressive 73% in his opening four games.

Jefferson Montero gave Ivanovic a torrid time in Chelsea’s opener against Swansea City. The Swans first goal scored by Andre Ayew was the result of a Montero cross which could have been avoided by the Chelsea right-back.

The 31-year-old’s game has also seen a dip aerially. Ivanovic has won 56% of his aerial battles to last term’s 59%. Manchester City’s second goal in their 3-0 win over Chelsea, scored by captain Vincent Kompany, highlighted the Serb’s lack of aerial presence as the Belgian out-muscled him at the near post to score.

Ivanovic is also down in two other key areas defensively this season. His interceptions (3 to 7) and clearances (12 to 15) have both taken a hit.

The Serb is also yet to make a block this season, compared to three from his opening four games last season. Both of West Brom’s goals in Chelsea’s 3-2 victory over the Baggies came via crosses that could have been avoided by the right-back.

Manchester City’s third goal resulted in the ball being given away by Ivanovic on the edge of the box. It fell to Fernandinho who inevitably scored. The Serb is making fewer successful passes per game this season (30 to 36) compared to his opening four games last season.

The right-back is known for his threat offensively however even here, Ivanovic has taken a dip. He has only made one key pass this season, compared to nine in his first four games last term.

New signing Baba Rahman was an unused substitute on Saturday and Jose Mourinho has made it clear that he is not happy with a number of his players.

A possible solution could see the Ghanaian come in at left-back with Cesar Azpilicueta reverting to his natural position at right-back.

There’s no doubt that Mourinho will address the defensive issues that Chelsea are currently experiencing. Could Ivanovic be the one that inevitably suffers?