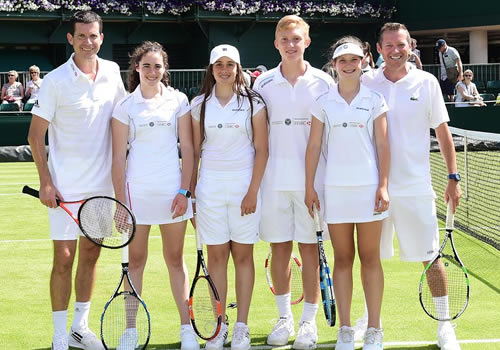 Impending fatherhood will have nothing but a positive effect on Andy Murray’s career, according to former British number one Tim Henman.

Last week, Murray and wife Kim announced they were expecting their first child, adding to what has already been a special year for the couple having tied the knot in the Scot’s hometown of Dunblane last April.

But while late nights and nappy changes could be coming Murray’s way in 2016, with the baby due in February, the Scot has been quick to allay any concerns over the arrival’s impact on his tennis, insisting the health of his newborn is his main priority.

It is something Henman agrees with too, believing the world number three can follow the examples of multiple Grand Slam winners Roger Federer and Novak Djokovic in taking fatherhood in his stride.

“It’s very exciting. As a dad of three, I know it’s an amazing time for them. It’s exciting news for Andy and Kim,” said Henman, who became a father for the third time shortly before retiring in September 2007.

“It’s another story. There’s a lot of speculation as to how that impacts your career on top of how much has married life impacted his career. Obviously he’s played very well since getting married.

“It’s a big change and I’m sure it’s another way of keeping things in perspective for Andy. I’m sure both Kim and Andy will adapt to a baby brilliantly.

“It probably means a couple of extra rooms in the hotels and stuff and logistically you need to manage that.

“But he’s got good people around him and I’m sure they will both love it.”

For now, Murray’s main focus will be on the hard court season as he builds towards bidding for his second US Open title when the competition gets underway in New York at the end of the month.

A day before last Friday’s baby was announced, Murray suffered a surprise defeat by Russian world number 53 player Teymuraz Gabashvili in the second round of the Washington Open.

But rather than be fearful over burn out for Murray after an impressive jam-packed year which has already seen the Scot reach the final of the Australian Open, semi-finals of the French Open and Wimbledon either side of victory at Queen’s Club – plus helping Great Britain into their first Davis Cup semi-final for 34 years – Henman believes the 28-year-old will adapt sufficiently to the needs of his body.

“He’s had very little down time. Again, making that chance from grass courts to hard courts, it was unfortunate he lost in Washington but that’s kind of why that event was there, so he had the opportunity of getting that change in surface.

“I’m sure there will be a time, probably at the end of the year because of the Davis Cup in September and the World Tour Finals, where he will just have to manage it.

“He finishes after the O2 in London then, I’m sure he will have a little bit of extra time and he might start next year a little later. I don’t know, I don’t know what his plans are.

“But again, it’s one of those things you’ve got to manage but I think it’s a nice problem to have, to have a lot of events coming up.”

Murray’s last Grand Slam success came back at Wimbledon in 2013, a year after he took his maiden major title – and Britain’s first since Fred Perry in 1936 – at the US Open.

And while world number one Novak Djokovic is favourite to add to his 2015 Australian and French Open crowns at Flushing Meadows come the men’s final on September 13, Henman believes British fans have every reason for optimism.

“Andy’s chances are very good, this year I think he’s played as good a tennis as I’ve ever seen him play,” said Henman.

“He’s won at the US before. Hard court is a good surface for him.

“Djokovic is the player to beat no doubt about it, but right now I’d say Murray and Federer are the second favourites.”

Tim Henman is an HSBC Ambassador. The HSBC Road to Wimbledon National 14 & Under Challenge is the UK’s largest national junior grass court tournament and forms part of HSBC’s investment in the stars of the future.