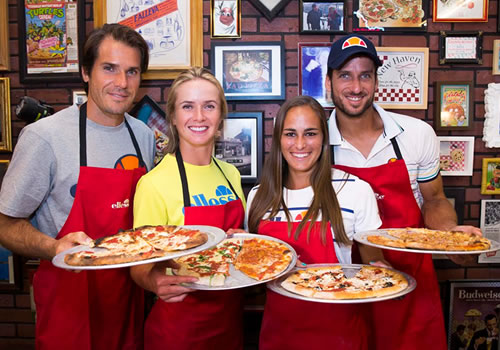 Tennis stars Feliciano López, Elina Svitolina, Tommy Haas and Mónica Puig have experienced a slice of New York’s Little Italy, visiting a Pizza School ahead of the US Open.

The four players, who are sponsored by Italian sportswear brand ellesse, learned how to cook the perfect New York pizza in a 90-minute class led by expert Mark Bello.

Feliciano López, the world number 18, said: “I have loved wearing ellesse’s Italian style on court this year so it was fantastic to experience a bit of Italian culture in New York and learn how to cook the perfect pizza.

“I’m really looking forward to the US Open, having played some great tennis in Cincinnati. Beating top players like Milos Raonic and Rafael Nadal gives me a lot of confidence, and I hope I can continue my good form at Flushing Meadows next week.”

Mónica Puig, who faces Venus Williams in the first round of the US Open, added: “Ahead of a Grand Slam, ellesse always looks to do something a little different, so coming to Little Italy was a nice treat before the serious business of the US Open gets underway on Monday. Everyone loves pizza, so it was amazing to learn from an expert how to cook it properly from scratch.” 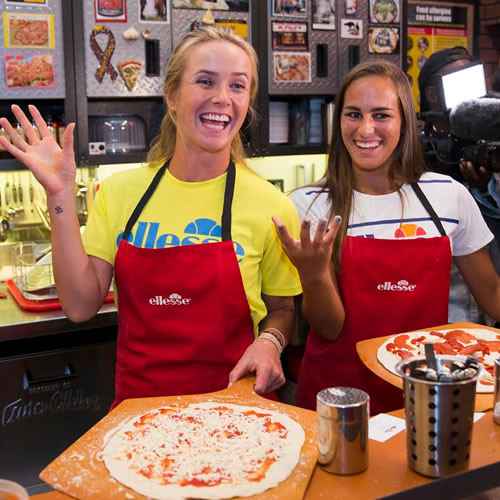 The US Open starts on Monday Photo: ellesse

Elina Svitolina, ranked 17 in the world after reaching the semi-finals of the Cincinnati Masters earlier this month, says she always enjoys playing in New York.

She said: “New York is always a special place to play tennis, so it was nice to get out and see a little more of the city. I was really happy to reach the semi-finals in Cincinnati and feel well prepared for the US Open. Having reached the quarter-finals of the French Open earlier in the summer, I know that I can make a big impact at the Grand Slams.”

Tommy Haas, three times a quarter-finalist at Flushing Meadows added: “One of the great things about playing tennis is that you get to travel the world and see interesting places. It was great for ellesse to bring us down to this part of New York and try out some of the best pizza I’ve ever tasted.”

US Open 2015: Maria Sharapova withdraws due to leg injury