Some lucky Arsenal fans were treated to surprise guest appearances at a photo shoot to promote the club’s new 2015/16 home and away kits.

The unsuspecting Gunners supporters were asked to pose in their new strips in the Armoury Store to help their beloved Arsenal promote their new kit. 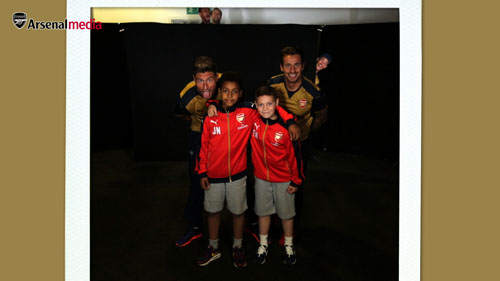 What they didn’t know was first-team members Petr Cech, Olivier Giroud, Francis Coquelin, Laurent Koscielny and Mathieu Debuchy were waiting back stage to surprise them.

In a clip which will surely give outspoken Roy Keane more fuel to criticise the Gunners despite their recent Community Shield triumph, the Arsenal sextet produced their funniest poses as they photobombed their own fans.

Nine year old twins, Jonnie and Joseph Gurie from Islington, were two of the lucky supporters surprised by the Arsenal players.

Shortly after the reveal, Jonnie said: “It was an amazing experience and we were so shocked and surprised that we got to meet our idols.”

His brother Joseph added: “We never thought we would get to meet such fantastic players and feel very lucky.”

Arsenal start their Premier League campaign with a clash against West Ham United at The Emirates on Sunday.

The full home and away kits are available to purchase online now at www.ArsenalDirect.com and in all Arsenal stores.