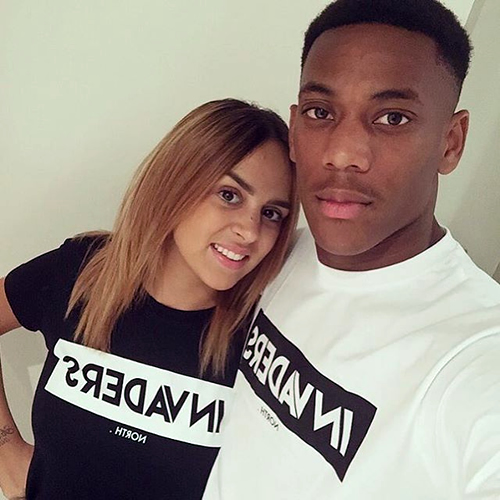 Anthony Martial’s stunning start to life at Manchester United continued on Wednesday night when he came off the bench to score the Red Devil’s third goal in their 3-0 win over Ipswich Town in the League Cup third round.

The teenage French striker has hit the ground running in superb style since his deadline day transfer to Old Trafford from Monaco earlier this month.

The 19-year-old opened his account with a late goal against Liverpool, before scoring twice in the 3-2 win over Southampton last weekend.

And Martial enjoyed some downtime with his wife Samantha on Thursday evening as he reflected on yet another good night for the forward.

Samantha Martial posted the picture above of the couple on his personal Instagram account and wrote: “Thank you @invaders75 👌”

The young couple have a baby daughter Toto, who was the recipient of Martial’s recent man of the match award last weekend.

He will be hoping to continue his fine start to life in the Premier League when United taken on Sunderland at Old Trafford on Saturday afternoon.

The Red Devils are currently second in the table and just two points behind leaders Manchester City heading into Saturday’s game.