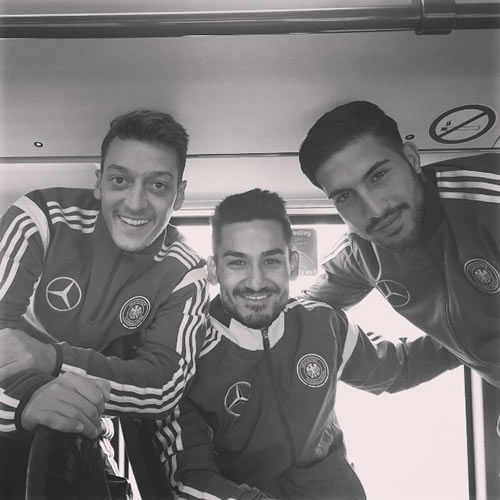 Mesut Ozil took to social media on Sunday morning to issue a rallying cry along with Liverpool’s Emre Can ahead of Germany’s Euro 2016 qualifier clash with Scotland.

Germany take on Scotland in Glasgow on Monday night as they look to keep their place at the top of Group D.

The World Cup winners have taken 16 points from their first seven qualifiers as they look to secure their place at next summer’s tournament in France.

Ozil played the full 90 minutes as Germany beat Poland 3-1 on Friday night to boost their hopes of reaching Euro 2016.

And Arsenal playmaker Ozil looked in good spirits as Germany geared up for their next clash.

Ozil posed for a picture with Liverpool man Can and Borussia Dortmund’s Ilkay Gundogan and wrote: “Three bravehearts for #Glasgow! 😁 #Scotland is a tough team to play but let’s top the group! ⚽ #SCOGER #europeanqualifiers”

Ozil will be hoping to feature when Arsenal return to Premier League action against Stoke City at Emirates Stadium after the international break next weekend.