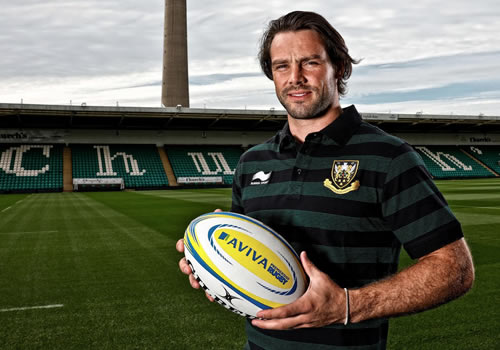 Ruptured knee ligaments sustained in January meant Foden has endured a long spell of rehabilitation and lost his chance to be involved in what would have been his second World Cup.

But Foden, who has 36 caps, believes England’s passionate support combined with their squad’s strength in depth can see them lift the Webb Ellis Cup once again.

“I think it’s a great opportunity for England to get through to the final,” Foden told The Sport Review. “They definitely have the calibre in the current squad to beat any team on their day and home advantage always give you that extra edge as well.”

Asked about Stuart Lancaster’s decision to replace George Ford with Owen Farrell at fly-half for the huge match with Wales on Saturday, Foden believes the plan is to strengthen England’s defence in the face of powerful Welsh running.

“Farrell will certainly shore things up in the back-line,” said Foden. “There’s great competition between the two of them at the moment which has given the coaches a bit of a headache in terms of whom to select.

“Owen did a great job in the first warm up game against France, his kicking put them in great position so you can understand the reasoning behind it if they do make that change.”

Farrell’s kicking was flawless in the 35-11 win over Fiji, with two successful conversions and a penalty, whereas Ford missed one of each in the game but still racked up eight points.

With the new Aviva Premiership season exactly three weeks away, 30-year-old Foden is now back to full fitness and says he’s enjoyed a great pre-season.

Having put his injury trauma now firmly behind him, the father-of-two is raring to go and will be looking to make a big impact when the Saints face the Worcester Warriors at the Sixways Stadium on 16 October.

“We’re a club with big ambitions to win some major silverware this year,” said Foden.

“Although we’ve had a few disappointments in the Champions Cup in the last few seasons, this season we’re really focusing on putting ourselves in a good position in that competition.

“From a personal point of view, I’ve had three seasons in a row where I’ve picked up major injuries now, so I’m looking for a good run of form and will be pushing to nail down that number 15 shirt.

“Hopefully then I can go and compete with the likes of Mike Brown and Alex Goode for the England position again.”