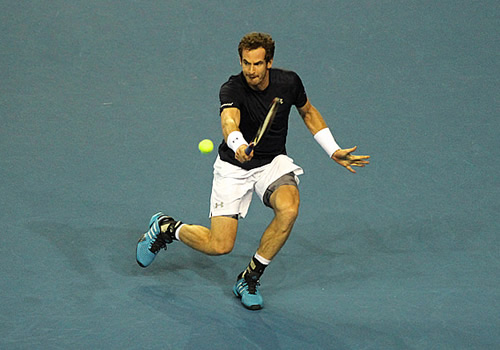 Aggression was the key according to Andy Murray as he got Great Britain off to a winning start in the Davis Cup semi-final clash with Australia.

For Murray it was a clinical display as he won 91 per cent of his first-serve points and produced a ruthless performance to blitz the young Australian in the second set.

“It’s fantastic, it’s a huge match and I think managed to put on a good performance,” said Murray.

“I was hitting the ball clean right from the beginning and I had break points and I was putting him under pressure.

“Once I managed to get the break I settled down and didn’t give him any opportunities on my serve and was really aggressive.

“I went for my shots and made it really tough for him.

“It’s a different atmosphere and being part of a team and representing my country is a proud moment every single time and I love it.”

Evans struggled in the first set of his clash with Tomic ​but the world number 300 came out swinging in the second and earned a break.

It wasn’t enough as he lost in the tiebreak but he won the third and played some brilliant tennis in the fourth only to come up short.

Asked about the home support in Glasgow after his defeat, Evans said: “Yeah it was very good out there.

“I was saying earlier that when I went out to the opening ceremony I was a bit taken back by how loud it was here. They do help you and spur you on when you’re down and that’s part of Davis Cup and having a home tie.”

Next up for Britain will see Dom Inglot and Jamie Murray take on Lleyton Hewitt and Samuel Groth on Saturday before Murray takes on Tomic and Evans goes against Kokkinakis on Sunday.