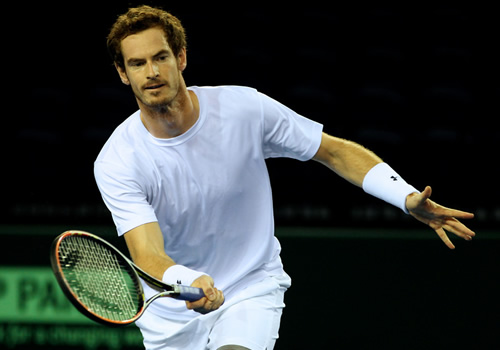 And so it all came down to the final day in a packed Emirates Arena.

And while the Glasgow weather had turned cooler and greyer outside, the temperature inside was soaring as the British faithful flocked in to support their home heroes. For history was in the making as the 2015 Davis Cup reached its crescendo.

In Belgium, two nations who had never won this trophy—the home country and Argentina—were locked at two rubbers to one. And in Glasgow, the brothers Murray, Andy and Jamie, had ensured GB also had a slender 2-1 margin. And while both the British and their illustrious opponents Australia had won many times before, history was on the line here, too.

Team GB had already gone further in the tournament than at any time since 1981, and was now aiming to reach its 20th final and its first since 1978. Beyond that lay the Holy Grail, a first title since Fred Perry led GB to its ninth way back in 1936.

For one man in particular, it could complete a quartet of extraordinary career achievements. World No3 Andy Murray is already the first man since Perry to win a Grand Slam—at the US Open in 2012—and Wimbledon—in 2013. He is also the first to win Olympic gold since 1908. Now he was after the full set with the Davis Cup.

Last year, Roger Federer was part of Switzerland’s first Davis Cup victory; Novak Djokovic was part of Serbia’s first winning team in 2010; and Rafael Nadal had been part of a victorious Spanish team four times. Now it was Murray’s chance to taste this unique sensation.

And in truth, although this was of course a team effort, no-one would deny that hope of victory has rested substantially on Murray’s substantial shoulders: already this year five singles wins and two doubles wins with brother Jamie. And with British second-string Dan Evans ranked a couple of hundred places lower than his fifth-rubber opponent Thanasi Kokkinakis, it was vital that Murray try to seal the deal against Australian No1, the 23-ranked Bernard Tomic.

It required more super-human effort from Murray: three best-of-five matches in back-to-back days, and the doubles rubber had been a hugely tense, four-hour affair. But he said ahead of this final match: “I’ve done it before and I’ll try and do it again.”

And Glasgow believed: The self-styled Stirling University Barmy Army had practised their chants in the velodrome next door ahead of the tie, and they had the arena stomping and singing before a ball was hit. If Tomic wasn’t intimidated before, he was now.

And what better way to start than with a Murray ace—all the more so because he was spearheading a Unicef campaign: £50 for every ace for the rest of the year. He dominated deep into the set, too, opening the third love game with another ace, and broke in the fourth game with some quite extraordinary defensive skills to draw a Tomic error.

But Murray’s fluid, confident tennis tightened up for the first time, serving for the set at 5-3. On a second break point, he double-faulted, and Tomic held to level, 5-5. Murray quickly refocused, though, backing up a love hold with a decisive break courtesy of a stunning sliced drop winner: 7-5.

The second set began in the same style, an ace, and some superb defence in the fourth game to draw a netted smash and the break form Tomic, but this time, Murray made no mistake. He held serve, and sealed the set with a love hold, 6-3. It had been the cleanest of sets, just three points dropped on serve, and 12 winners for just two errors: 74 minutes and with considerable momentum.

Murray did not look back, once again breaking Tomic in the third game. The Australian was beginning to buckle under the pressure, and two gorgeous drop shot winners, backed up by an ace for a love hold, felt like the last nail in the Australian coffin.

Sure enough, Murray was not going to back off, and used some more remarkable defensive play to finally break Tomic again, and the Briton served it out, 6-2, to uproarious celebration.

Murray raised his arms, threw back his head, and embraced captain Leon Smith. Then it was time to acknowledge the crowd, and pump his fists in celebration of a singular effort. He hit 15 aces, made 38 winners and just eight unforced errors in the match—an hour and three-quarters of fine tennis. Smith, with typically wry Scots humour, told the crowd: “He’s quite good isn’t he?”

He added: “It’s pretty amazing watching Andy’s work over the whole weekend, he fights so hard and he’s got the quality. He executed it perfectly today. So many people have played their part, and the crowd were absolutely brilliant.”

Murray talked of a whole range of emotions: “It’s been a very tough weekend for me physically and mentally, there’s a lot of emotions out there. Yesterday’s match was a very tough one and turned out to be crucial. I’m very proud to be through to the final. It would be an incredible achievement [to win the Davis Cup], but whoever we play it will be a tough match.”

As he spoke, Argentina and Belgium were tied at 2-2 with Federico Delbonis taking on Steve Darcis in an even more closely-contested semi-final between two men ranked just one spot apart, 64 and 65.

There was a certain bias in the British camp for an Argentina win, as that would guarantee another home tie in the title bout. Otherwise, the final will be held in Belgium.

The rules of the game determined that the final ‘dead’ rubber between Evans and Kokkinakis would be played, and that went to the teenage Aussie in straight sets.

Murray afterwards revealed that he had been carrying a back problem since before the tie began—stiffness, and nothing of great concern. He was then asked for his thoughts about the final: “I’ve thought about what it means to reach the final. Let’s not think about winning the event. I have an opportunity to do that in the next match. So much tennis still to go, still need to win three matches, we don’t even know who it’s against yet. There’s still two or three months before the next tie. A lot can happen between now and then…”

It can indeed, but that won’t stop British fans from thinking already about the last weekend in November. History really could be beckoning Murray and Team GB.