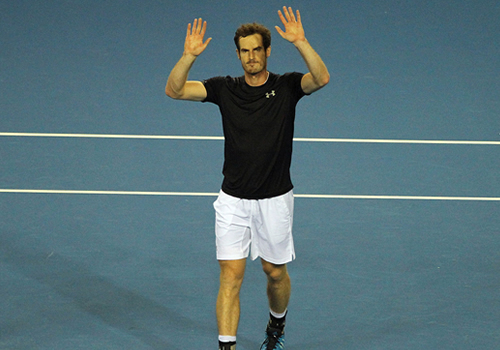 Andy Murray had given GB a 1-0 lead in Glasgow Photo: Marianne Bevis

The GB protagonists in the Davis Cup battle for a place in the final, world No3 Andy Murray and No300 Dan Evans, were out practising well before the faithful 8,000 descended on the Emirates Arena in Glasgow.

Or rather 7,500, for the opposition, Australia, is renowned for the army of fans that emerges wherever the green and gold is in need of support.

Not that 28-time champions Australia could be regarded as underdogs in this battle between two of the oldest members of the Davis Cup family. Great Britain was one of the founding members of the tournament in 1900 and Australia joined five years later. Surprising, then, that in almost 500 ties since, these two nations have played since, they have met only 12 times.

Australia, too, was the ‘senior partner’, with eight wins to four, and accumulated a staggering 28 titles to Great Britain’s nine. Australia also, as it happens, won their last meeting on their way to their last title, in 2003.

They now returned with one member of that winning side, veteran Lleyton Hewitt, but backed up by a band of young Aussies ready to reclaim former glories. Their singles nominees, 22-year-old Bernard Tomic and 19-year-old Thanasi Kokkinakis, both rangy, attacking, 6ft5in players, have talent in spades, and judging from their pre-tournament press conference, confidence in spades as well.

Tomic took on Evans on the first day—an intriguing match-up, since their only previous meeting had gone to Evans at the US Open—but first up was Murray against Kokkinakis—also an intriguing contest.

There were differences aplenty: Murray ranked No3, the Aussie 72, Murray a two-time Grand Slam and Olympic champion with 35 titles to his name, Kokkinakis yet even to reach a final—and separated by almost a decade in age and experience.

Yet the two men, though they had not met competitively, had struck up a friendship after practising together, and they played doubles together at Indian Wells earlier this year.

Murray admitted ahead of this opening rubber: “It’ll be a tough match against Kokkinakis. I’ve practised with him and watched him a lot, so I know his game better than I do a lot of the younger guys. He’s a pretty explosive player, but it’ll be a tough one for him as well. The atmosphere would be challenging for them. That’s something they have to deal with and hopefully something that will give us a boost.”

That proved to be an understatement. The two modest contingents of Australian fans faced one another across a sea of blue and Union Jacks. Not for Glasgow the ‘fair play’ of equal flags, as Queen’s Club had favoured in the summer. It was wall-to-wall British colours—and the opening rendition of Loch Lomond sent shivers down the spine.

It looked and sounded a lonely court for the young Aussie, a lion’s den of intimidation, and he was up against it from the start. Murray held the opening game before Kokkinakis faced break point and several deuces through an eight-minute hold—though the attack of the Australian was clear: He serve-and-volleyed to close it out.

And time and again, Kokkinakis faced break points—twice in the fourth game, saved with a volley then an ace, three in sixth, but eventually and inevitably, the pressure told, and the Emirates Arena erupted. A love hold, and £100 into Murray’s ‘Aces fundraiser’, and Murray was 5-2 up. Then one perfect drop-shot winner and another ace, and he had held to love, 6-2. 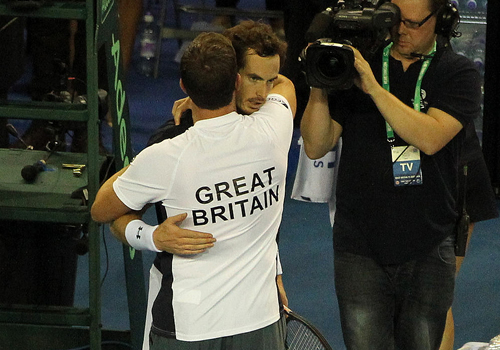 The set had taken a demanding 44 minutes and Kokkinakis had certainly shown what he could produce, but Murray had the wind in his sails. He broke to love in the first game, throwing in a perfect lob, held to love—a run of 10 points.

He broke twice more, playing some sublime tennis that appeared to break the will of the Australian. Murray served it out, 6-0, having won 24 points to five in the set, 10 winners to one.

To his credit, Kokkinakis dug deep in the third, fought off deuce in the first game to hold. But Murray nabbed a quick break in the third and broke again for set and match, 6-3. The Briton had dropped only one point on serve in the set and hit 22 winners to five, to finish with an outstanding 42 winners to 16 unforced errors ratio.

Kokkinakis summed it up: “I’ve practised with him a fair few times and I can say that’s the best he’s ever played against me by a mile. I don’t know, I just got outplayed today, just too good.”

In fairness, Murray was hot favourite to win this rubber, and that he did so in a tidy 1hr47mins. However, Evans faces a much bigger task. The 25-year-old Briton had not played in the Davis Cup since the World Group play-offs in September 2013, and dropped to No772 in the rankings just four months ago.

But some great results on the lower Future and Challenger Tours had reaped plenty of wins, 29 of his last 33 matches, so his name was put in the frame on the back of match-sharpness—and that win over Tomic.

Tomic looked every inch the superior ranked player in the first set, taking it with one break of serve in under half an hour. He then got a quick break in the second, but Evans began to rise to the occasion, broke back, and stuck with Tomic all the way to a tie-break. The Australian looked tight but held on for the set, 7-6(2), but such had been the fight-back that the crowd was in raucous voice, wanting more.

Again, Evans went down a quick break, to trail 5-2, and Tomic served for the match. But with the crowd behind him and perhaps memories of that previous meeting—when Evans also came back from a set and a break down—the Briton chipped and sliced his impressive single-handed backhand and pulled off a remarkable off-drop-shot winner on his way to the set, 7-6(4).

Yet again, Tomic got the quick early break, and again Evans pressed hard with some great offensive backhands to earn two break-back points, but could not level. He had another chance in the sixth game, but a weary Tomic resisted for 4-2. Instead, it was Evans who gave up another break, and although this time he broke straight back, it would not be enough.

Tomic looked in physical trouble, bent double and apparently cramping, but he just needed to hold serve one more time, and he did. Tomic levelled the tie, 6-4, after almost three hours of intense competition.

Now comes another hard decision for the GB team: Will Murray attempt the triple as he did in the quarter-finals, an effort that had him on his knees? Or will captain Smith stick with his outstanding doubles experts, Dom Inglot and Jamie Murray?

By midday on Saturday, we will know.