John Barnes: Why Liverpool shouldn’t get carried away with Joe Gomez

John Barnes has warned Liverpool supporters not to place too much pressure on Joe Gomez.

The 18-year-old left-back has been one of the Merseyside outfit’s outstanding performers this season after featuring in their opening four Premier League games.

He’s still gaining experience, so maybe we just have to not get too excited about Gomez

Gomez teed up Philippe Coutinho for Liverpool’s 1-0 winner against Stoke City at Britannia Stadium on his Reds debut in their opening Premier League game.

While Barnes accepted that Gomez has impressed early in his Liverpool career, the former England midfielder was quick to play down the growing hype around the full-back.

“I would have never got carried away with Joe Gomez,” Barnes told talkSPORT.

“He’s a young boy who they wanted to put out on loan, but he did so well in pre-season that they threw him in to the first-team.

“Some people were saying that he’s going to be the Liverpool left-back for the next ten years!

“He’s still gaining experience, so maybe we just have to not get too excited about Joe Gomez, thinking that he’s now going to nail down the left-back position.

“He may not have played well against West Ham… but it’s just one bad performance in one bad result.

“[The criticism of him] is a little bit harsh. He’s a young boy and it’s a new Liverpool side.”

Gomez has been outperforming some of the Premier League most-established left-backs so far this term, including Aleksandar Kolarov and Cesar Azpilicueta.

Stats from www.oulala.com show Gomez has impressed in five different categories this term following his Liverpool debut at Britannia Stadium. 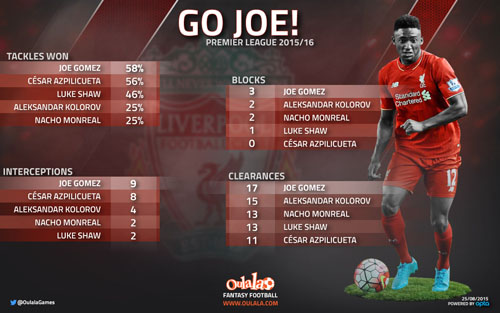 Liverpool face Manchester United in their next Premier League game.