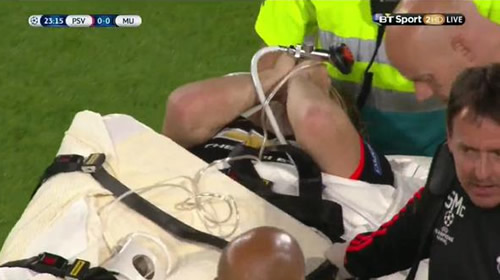 Luke Shaw suffered a suspected broken leg during the first half of Manchester United’s Champions League clash with PSV Eindhoven on Tuesday night.

The 20-year-old England defender suffered the horrific-looking injury in the 15th minute when he was brought down by a hefty challenge by Hector Moreno.

Shaw required lengthy treatment on the pitch before he was carried off on a stretcher wearing an oxygen mask to warm applause from the crowd.

The pictures of the injury prompted a huge response on social media – and here are some of our favourite updates following the horrific-looking setback for the former Southampton man.

Arsenal shareholder Piers Morgan is one of the first to tweet about the incident:

Alan Shearer is gutted for the defender:

The pictures look bad. Feel so sorry for #LukeShaw after he started the season so well. #getwellLuke #MUFC #PSV

Jack Butland chimes in with his own message of support:

gutted for you mate, head up and I hope you make a speedy recovery! @LukeShaw23 👊🏼

Ben Foster sends his best wishes to the defender:

Awful to see that injury to poor Luke Shaw, Wishing you a speedy recovery pal.

And Alan Tonge also chimes in: