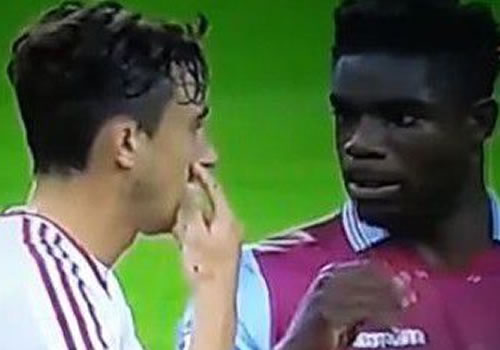 Matteo Darmian was thought to have been distracting Micah Richards Photo: Screengrab

Matteo Darmian has explained what happened between himself and Micah Richards after a video clip of him appearing to distract the defender during Manchester United’s clash with Aston Villa went viral.

The Italian, who joined United from Torino earlier this summer, was pictured pointing to his face while talking to Richards just before a corner during the Red Devils’ 1-0 win at Villa Park last month.

The video of the incident prompted fans on social media to claim that Darmian had tried to deliberately distract Richards in order to steal a march on his counterpart as the corner was delivered.

However, Darmian has moved to end that theory by revealing that he was simply trying to point out that Richards had sustained a cut to his face.

Speaking to United’s website about the incident, Darmian said: “With Micah, it was said I tried to distract him at the corner and I saw a video came out where they were saying I was pointing to his face to put him off.

“However, it was because he had a cut on his face and I was trying to tell him it was bleeding. That is what it was all about.

“The journalists jumped on the incident a bit but, at the end of the game, we shook hands and it was all fine. I certainly never called him soft if he thought that!”

Darmian will be hoping to feature when United take on Liverpool at Old Trafford on 12 September after the international break.

Paul Merson: Why Man United will finish fourth above Liverpool this term

Photo: Tottenham’s Christian Eriksen and his girlfriend become fans for the night