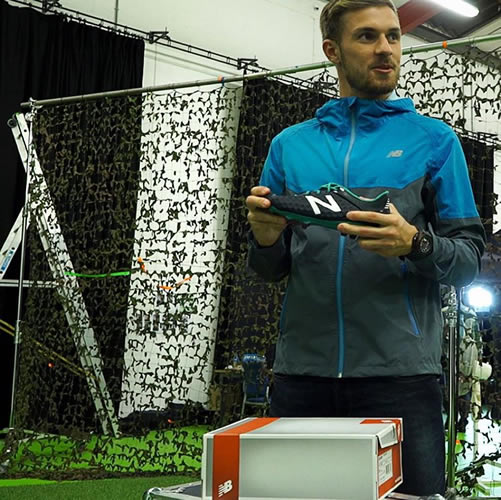 Aaron Ramsey has taken to social media to show off his latest pair of New Balance football boots ahead of Arsenal’s trip to Chelsea in the Premier League on Saturday lunchtime.

The Gunners head to Stamford Bridge looking to claim victory over their bitter local rivals after suffering a 2-1 Champions League defeat by Dinamo Zagreb in midweek.

Ramsey posted the picture above of himself eyeing up the new Visaro boot, which is blend of two distinct shades of green, Baltic and Serene, on his personal Instagram account on Friday morning.

The Wales midfielder shared the snap and wrote: “Loving the new colour #Visaro. Can’t wait to wear them tomorrow! What do you think guys? #MakeChances @nbfootball”

Arsenal head into Saturday’s clash on the back of their 2-0 win over Stoke City at Emirates Stadium last weekend.

The Gunners are currently third in the Premier League table and five points behind early pace-setters Manchester City.

Chelsea, meanwhile, are a further six points behind their rivals after a stuttering start to their title defence.

Arsene Wenger: My message for Jose Mourinho ahead of Chelsea v Arsenal