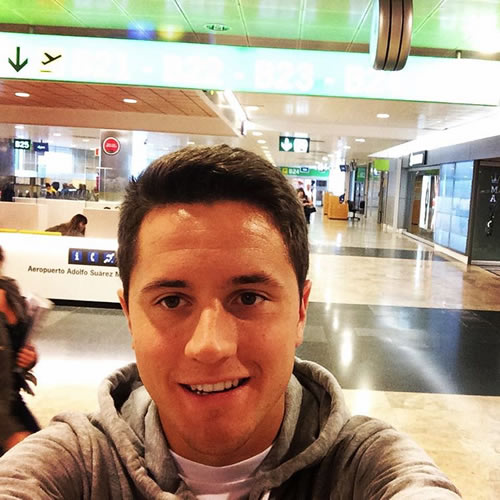 Ander Herrera was all smiles as he snapped a selfie ahead of his trip back to Manchester on Monday afternoon.

The Spaniard has been enjoying some downtime during the international break as the Red Devils prepare to host their fierce rivals at Old Trafford this weekend.

And the midfielder looked thrilled to be heating back to Manchester to prepare for this weekend’s crunch Premier League showdown against Brendan Rodgers’ men.

Herrera shared the selfie of himself at the airport above on his personal Instagram account on Monday afternoon and wrote: “Time to get back to Manchester,big game on Saturday 🔴 @manchesterunited”

The 26-year-old has been a regular fixture in Louis van Gaal’s first team so far this season and has made three Premier League appearances for the Red Devils.

He also made one appearance in the Champions League qualifier against Club Brugge last month, scoring in the 4-0 win in Belgium.

United are currently fifth in the table after they suffered a surprise 2-1 loss to Swansea City in their most recent Premier League outing.