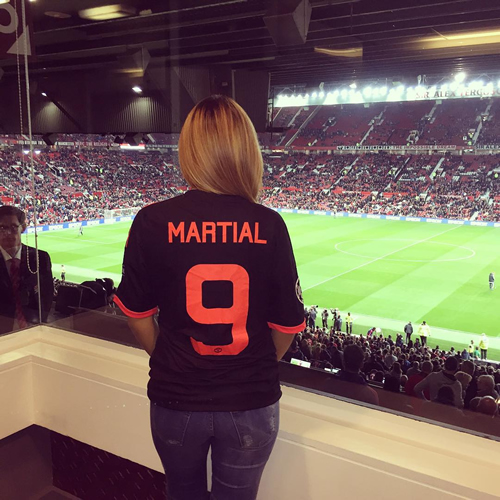 Anthony Martial continued his fine form for Manchester United by scoring his fourth goal for the club during Wednesday night’s 3-0 win over Ipswich Town in the third round of the League Cup.

And the Red Devils new boy was cheered on by his wife Samantha during the game, as Louis van Gaal’s men booked their place in the fourth round of the cup competition.

Samantha Martial posted the picture above of herself wearing a United shirt with her husband’s name on the back on her personal Instagram account and wrote: “❤️⚽️”

Wayne Rooney netted his first domestic goal of the season to put United ahead in the 23rd minute at Old Trafford.

Midfielder Andreas Pereira then scored a spectacular free-kick to double the lead on the hour mark on his first start for the club.

And substitute Martial then coolly slotted home a third in stoppage time to send the Red Devils through to the fourth round, where they face a home clash with Middlesbrough.

Martial has now scored four goals in four games since his transfer to Manchester United from Monaco on deadline day earlier this month.