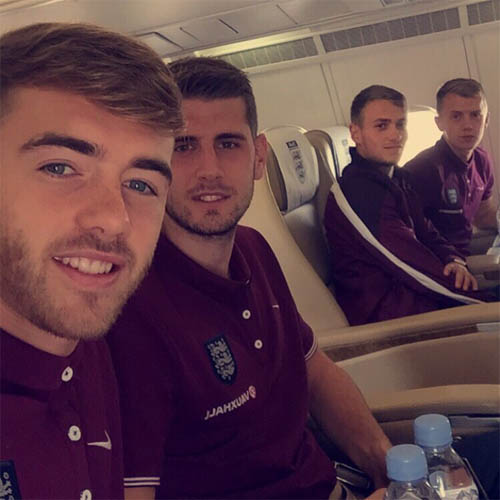 Calum Chambers was in high spirits with his England Under-21 team-mates as Gareth Southgate’s squad headed to Norway on Sunday.

Southgate and his squad are currently travelling to Norway ahead of their European Under-21 championship qualifier.

And Chambers, who has endured a mixed start to the season, snapped a selfie with three of his team-mates on their flight to their European rivals.

Chambers wrote on the photo-sharing app: “On the way to Norway ✈️”

The England international moved to The Emirates in a £16m deal from Southampton last summer after an eye-catching spell at St Mary’s.

Chambers scored one goal in 23 Premier League appearances in his first season in north London but played 13 further games in cup competitions.

The Arsenal youngster was also part of their FA Cup-winning side.