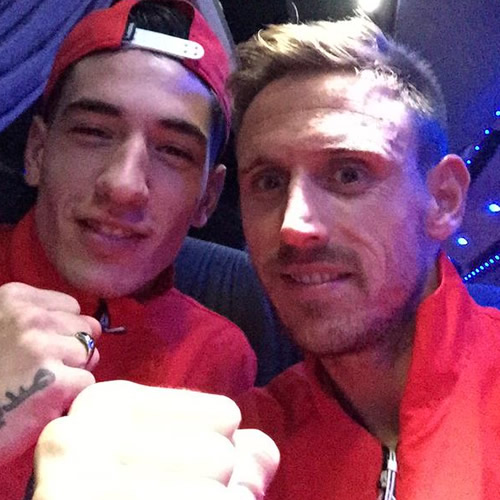 Nacho Monreal was all smiles with Hector Bellerin after Arsenal sealed a dramatic 2-1 win over Tottenham Hotspur to book their place in the fourth round of the League Cup on Wednesday night.

Mathieu Flamini scored either side of half-time for Wenger’s men after Calum Chambers’ own goal brought Spurs back into the game in the second half.

Both Monreal and Bellerin were unused substitutes on the night as they watched their team-mates secure victory from the bench at White Hart Lane.

However, that didn’t prevent the pair from getting involved in the post-match celebrations, as they posed for a snap on the Arsenal team bus on their way home on Wednesday evening.

Monreal shared the picture above on his Twitter account and wrote: “Always nice to win the north london derby, specially at the lane #NorthLondonIsRed”

Arsenal will now take on Sheffield Wednesday away from home in the fourth round of the competition, with the ties set to be played on 27 and 28 October.