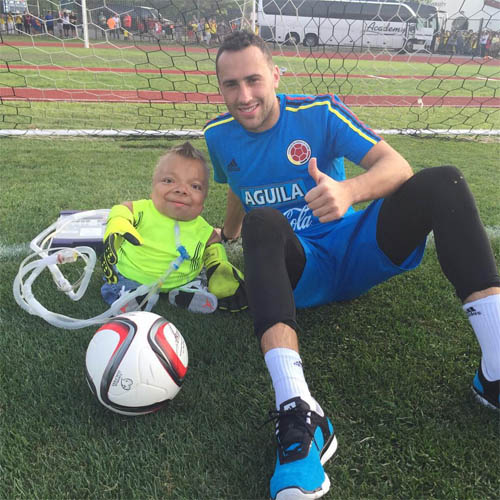 David Ospina was drawing inspiration from a brave Colombia supporters on Thursday.

The Arsenal goalkeeper met 17-year-old Christopher Alvarez during a break from first-team training with his international team-mates yesterday.

Alvarez was born with Thanatophoric dysplasia – a severe skeletal disorder characterized by extremely short limbs and folds of extra skin on the arms and legs.

But Ospina looks to have competition for a starting place in the Colombia goal as he posed for a snap with the young football fan and posted the photo on his Instagram page.

Ospina wrote: “With this great human being and Life example👏👏”

Ospina has yet to make a first-team appearance for Arsenal this season after falling behind new signing Petr Cech in the pecking order in Arsene Wenger’s starting line-up.