Aaron Ramsey enjoyed some downtime with his wife and dog on Sunday... 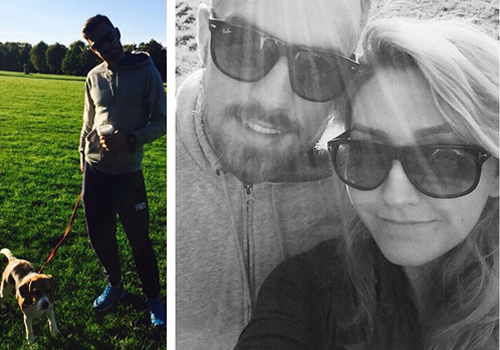 Aaron Ramsey enjoyed a relaxed Sunday after helping Arsenal return to winning ways in the Premier League with a 5-2 win over Leicester City on Saturday.

The 24-year-old midfielder played 77 minutes as Alexis Sanchez scored a superb hat-trick to add to goals from Theo Walcott and Olivier Giroud and hand the north London side victory at the King Power Stadium.

The win lifted Arsenal up to fourth place in the Premier League table ahead of next Sunday’s clash with leaders Manchester United at Emirates Stadium.

And the Wales international enjoyed a stroll with his wife Colleen and dog on Sunday as Wenger gave his men some time off.

Arsenal take on Olympiacos in the Champions League at Emirates Stadium on Tuesday night as they look to get their first European points of the season after their 2-1 loss at Dinamo Zagreb earlier this month.

Photo: Man United defender chills on the sofa with his dog